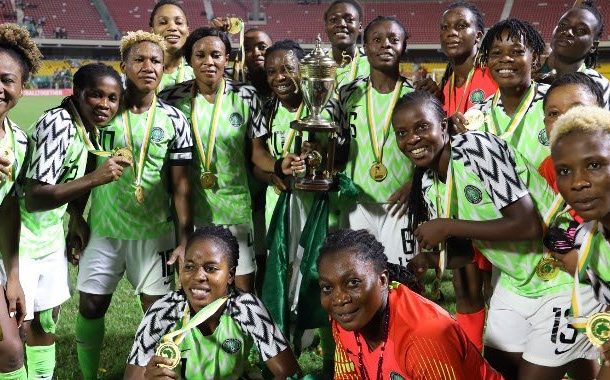 Africa champions Nigeria will continue preparations for the FIFA Women’s World Cup France 2019 at the annual Cyprus Women’s Cup tournament to be held between 27 February to and 6 March in the Southern coastal city of Larnaca.

Now, in its 12th edition, the 12-nation invitational tournament would also be attended by three other France 2019-bound teams including Banyana Banyana of South Africa as well as Thailand and Italy. Others include hosts Cyprus, Austria, Belgium, Czech Republic, Finland, Hungary, North Korea, Mexico and Slovakia.

Drawn in Group C, the Super Falcons will open their account at the Cyprus Cup against Austria on 27 February to be followed with the match against Slovakia on 1 March and Belgium three days later.

“Our preparation for the World Cup in France is going well because this tournament in Cyprus would give us the chance to look at the players again,” Super Falcons Assistant coach and former Nigerian international, Maureen Mmadu, told CAFOnline.com ahead of the team’s departure.

“This tournament in Cyprus is another opportunity to have a look at the players that we are likely to take to the World Cup in France and I can say that our preparation towards the World Cup is well on course.

“The inclusion of Asisat Oshoala and Desire Oparanozie is a big boost because they were not available when we played at the last China Women’s Tournament and I believe we are going to improve very well as we build up towards the World Cup in France.”

Meanwhile, Nigeria trainer Thomas Dennerby has selected a strong squad of 24 players for the tournament with the inclusion of former African Women’s Player of the Year, Oshoala, and fellow striker Oparanozie, who both missed the China Women’s Tournament last January.

“Kudos to the Nigeria Football Federation (NFF) for giving us this sort of platform such as the Cyprus Cup to have a very good preparation before the World Cup and it is now left to us to go and do our best to show what we can do at the World Cup,” added Mmadu, the former international who represented Nigeria in past four FIFA Women’s World Cup in the 1995, 1999 2003 and 2007 editions.

In the meantime, the Super Falcons who will be making a joint-record eight appearance at France 2019 are drawn along with hosts France South Korea and Norway in Group A as the eighth edition of the FIFA Women’s World Cup will be held between 7th June and 7th July.