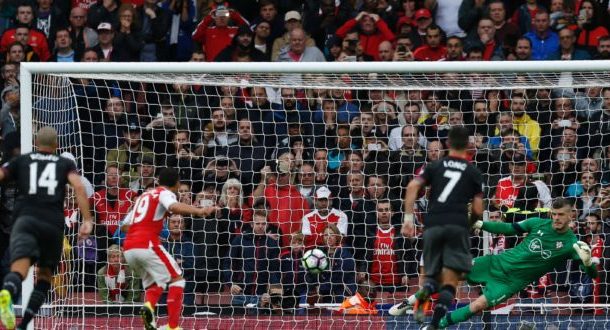 With the first Manchester derby of the season decided, it was on to the 3pm action across the Premier League…

It took 18 minutes for the first goal to be scored and it went the Saints’ way.  The Gunners conceded a free kick on the edge of the box, Dusan Tadic stepped up, took his time, and his effort hit the bar before bouncing in off the back of Petr Cech.  Laurent Koscielny equalised in spectacular fashion on the half hour mark, acrobatically volleying the ball home with a bicycle kick.

It looked as though both would settle for the point, but there was late, late drama at the Emirates. Olivier Giroud was adjudged to have been fouled in the box four minutes into added time, and Santi Cazorlasent Fraser Forster the wrong way, scoring the winner from the penalty spot.

Albion This fixture seemed as though it would end all square, but a little magic from striker Callum Wilson broke the deadlock. Brad Smith delivered an inviting cross into the box from the right flank, and Wilson tricked the Cherries’ defence, deftly flicking the ball inside the far post, with 79 minutes having been played. This was to be the only goal of the game, sealing three crucial points for the hosts.

It took 72 minutes for the opening goal to arrive at Turf Moor – but it was worth the wait. Steven Defour burst forward in the centre of the park, before unleashing an unstoppable drive from almost 30 yards, beating the hapless Eldin Jakupović.

Burnley almost responded minutes later, hitting the frame of the goal following Robert Snodgrass’ corner. The game was far from over, and into the fifth minute of injury time, Snodgrass grabbed the equaliser, sending his side home with a point.

Christian Benteke opened his account for his new club in the 16th minute, outmuscling Daniel Ayala at the far post to head in his first goal for the Eagles since his £27m move from Liverpool. Boro hit back with 38 minutes on the clock. Ayala made amends for being outjumped by Benteke for the opener, leaping highest to level the score.

Only three minutes into the second half and the visitors restored their lead – through Wilfried Zaha. The winger, criticised for his lack of end product, capitalised on an error from Boro’s defence in the box, and confidently fired the ball home from close range. His strike proved to be the last of the action at the Riverside Stadium. Stoke City 0-4 Tottenham Hotspur With new rules for match officials this season, with the aim of clamping down on aggressive behaviour, it was only a matter of time before a manager was given his marching orders.

Mark Hughes became the first boss of the campaign to be punished, being sent to the stands for his actions on the touch line towards the end of a goalless first half. The Potters had looked dangerous going forward, but Spurs soaked up the pressure, taking advantage of Hughes’ dismissal. Son Heung-min, making a return to the starting line-up, was afforded too much time by the Stoke defence, finding the space to poke the ball past Shay Given, four minutes from half time. Into 10 minutes of the second half, Son had bagged a brace at the Bet365 Stadium.

Christian Eriksson grabbed his second assist of the game, playing in the Korean to his left, who beautifully curled the ball into the far corner, making it 2-0 to the visitors. Dele Alli, in the 59th minute, and Harry Kane, in the 70th minute, also scored to comfortably confirm victory for the away side.

There’s only one man West Ham can rely on for goals at the moment, and that’s Michail Antonio.

The former Nottingham Forest winger rose highest to meet Dimitri Payet’s corner and headed pastHeurelho Gomes, with the help of a slight deflection, to make it 1-0 in the fifth minute.

Payet marked his return to the Hammers’ starting line up in predictably magnificent fashion. The Frenchman delivered an inch-perfect cross, via a sublime Rabona, again to the head of the prolific Antonio at the back of the post, who made it 2-0 with 33 minutes on the clock.

The Hornets, though, quickly replied to going two goals down. Odion Ighalo found himself in space inside the box, beating Sam Byram before cutting inside and sending the ball past Adrian eight minutes later. Soon, Watford were on level terms. Miscommunication between James Collins and Adrian resulted in the pair failing to clear a ball over the top, and Troy Deeney pounced.

The 28-year-old, from a tight angle, exquisitely chipped his effort over Hammers defenders on the line and into the far corner. With 53 minutes played, Watford stunned the hosts to make it 3-2. Etienne Capoue grabbed his third goal in four games, meeting the half-volley at the near post. The Hammers’ heads had dropped and 10 minutes later, the Hornets had their fourth. José Holebas grabbed the goal from the edge of the box, meeting Ighalo’s pull back to conclude the comeback. –