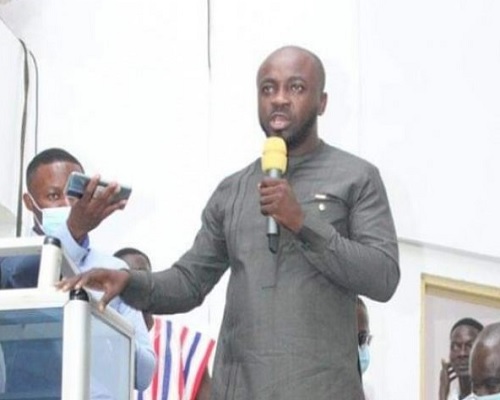 The Ahafo Regional Organizer of the ruling New Patriotic Party, Mr Michael Osei Boateng, has asked members of the Sunyani Technical University chapter of the Tertiary Education Students Confederacy (TESCON), the student wing of the NPP, to not relent on their core mandate of supporting the government to succeed.

Addressing the general meeting of TESCON-STU, an event that welcomed freshers of the institution, the aspiring National Youth Organiser of the NPP affirmed that, as a most vibrant wing of the party, the student wing has always led the way in carrying the message of the party across to the people, wherever they may be, and by every means possible.

This, according to the former SRC President of the same institution, is borne out of unwavering commitment students have always attached to their service to the party, and accounts for why TESCON has been able to resource the party with leaders at all levels of the mother party.

Michael Osei Boateng, known in the political circles as POPE, recounted many instances in the past in which TESCON-STU prosecuted the campaign of the NPP in constituencies others termed as hard to reach places-Techiman North, Asutifi South, Sene West, the former Pru constituency among others.

"We have to sacrifice; we have to commit ourselves to the game. TESCON is not all about coming for programs, coming for orientations, and going back to your hostels. As you are here now, you have to be the embodiment of NPP on campus; let people see the NPP in you, the NPP in your face. Let them see you!" Pope admonished.

The National Youth Organizer aspirant minced no words when he asked the freshers to refine their attitudes when on campus, and support the government at all times.

He shared with them periods when, as the breeding ground for intellectuals, the party fell on the wing to lead its advocacy - on the grounds, in the mainstream media, as well as social media.

According to him, for the party to live the 'Break the 8' mantra, TESCON would have to work extra harder. This, he charged them with and expressed his readiness to lead the student wing in that direction.