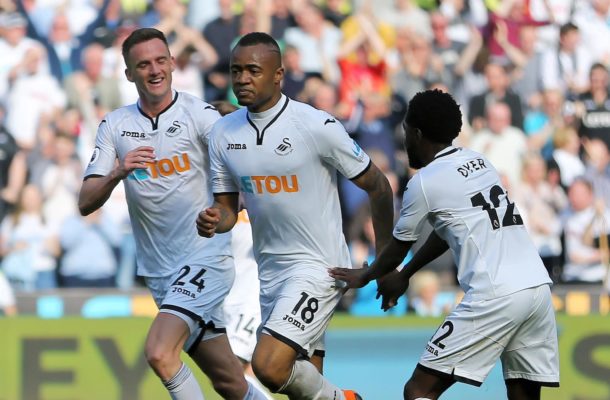 Swansea City midfield midfielder Andy King is backing Jordan Ayew to continue his impressive form as Swansea City gets set for the final push for survival in the heated Premier League relegation race.

Jordan has proven to be key to Swnasea’s bid to remain in the top flight, netting seven goals since the end of December.

His latest coming last weekend against Everton when he marked his return from suspension by scoring the equaliser which rescued a point for the Swans’ in their 1-1 draw.

Curiously, the Ghanaian has become a bit of a lucky charm for his side, Swansea are yet to lose a game in which he has found the back of net this season.

“Jordan’s been brilliant, not just with his goals but also his work-rate and everything else he brings to the team,”  Andy King said in an interview with the club’s website.

“We were all pleased to see him score in his first game back.

“Hopefully, he can stay fit and keep scoring between now and the end of the season. He has shown he has the quality to do that and his goals have been important for us.”