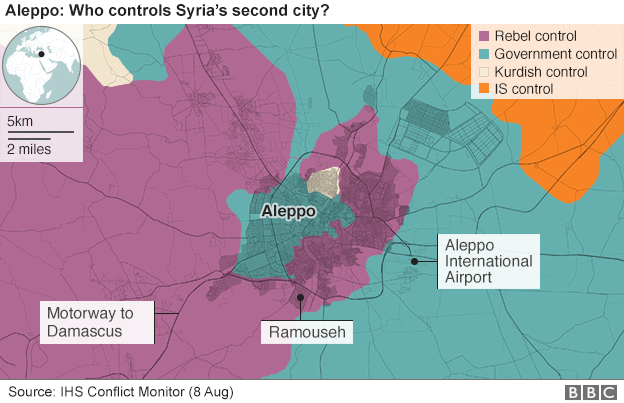 Children in the Syrian city of Aleppo are at "grave risk" of disease unless water supplies are immediately repaired, the UN children's agency says.
The United Nations says an immediate pause in fighting is needed to allow the water and electricity networks to be fixed.

Some two million people are without vital supplies, the UN says.

Fighting between government forces and rebels has intensified in recent weeks.

At least 250,000 people are believed to have been trapped in rebel-held areas of eastern Aleppo since a key route into the area was closed by government forces in early July.
On Sunday, rebels cut off the government's key access route into western Aleppo.

They have since come under intense air bombardment from pro-government forces.


Unicef said the whole city had been without running water for four days.

"These cuts are coming amid a heatwave, putting children at a grave risk of waterborne diseases. Getting clean water running again cannot wait for the fighting to stop. Children's lives are in serious danger."

The UN echoed Unicef's concerns, and said only a full-fledged ceasefire or weekly 48-hour humanitarian pauses would enable them to reach everyone in need and replenish the "dangerously low" food and medicine stocks.

"The targeting of hospitals and clinics continues unabated, seriously jeopardising the health and welfare of all citizens of Aleppo," said Yacoub el-Hillo, UN Resident and Humanitarian Co-ordinator for Syria, and Kevin Kennedy, Regional Humanitarian Coordinator for the Syria Crisis.

Aleppo was once Syria's commercial capital and also boasted a rich architectural and archaeological heritage.

Much of it has been destroyed or looted during more than five years of war.