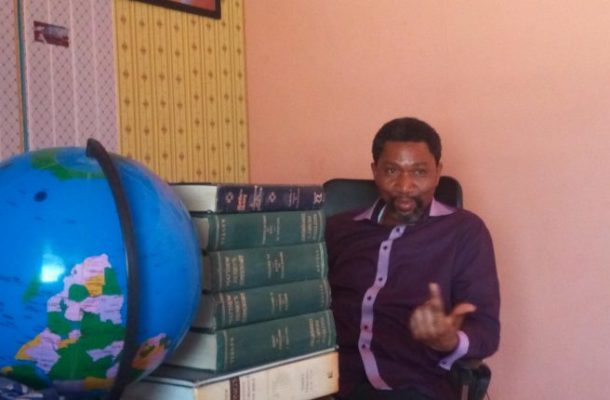 A Bolgatanga-based prophet, who is much the same as Nigeria’s Prophet T.B. Joshua both in appearance and in speech style, has revealed four unsuspected items among other things he says witches are using to initiate children and to bewitch families in the Upper East region.

Prophet Henry Osas Elijah, a mentee of Prophet T.B. Joshua and founder of the Soul Winners Miracle Embassy International, became a well-respected figure after he asked his church in 2015 to pray against the death of a popular helper of the needy in the region from what had appeared to him in a vision as “acid or fire burns” all over the body.

Shortly after that prophetic alert, a famous humanitarian who was Upper East Regional Chairman of the New Patriotic Party (NPP) at the time, Adams Mahama, died from a midnight acid attack. His fame rose further after some self-confessed witches intruded his church premises at midday about four months ago.

The self-admitted occultists were there to complain that his prayers were disrupting the operations of the occultist kingdom in the region and that he was setting free the souls they had “enslaved and tied down like beasts” to social vices, depression, disappointments and setbacks. They openly warned him to take a cue from what they (the occultist empire) did to Rev. Eastwood Anaba’s children, clearly referring to the ‘unexplained’ road crash that killed the two daughters of the Senior Pastor of the Fountain Gate Chapel and four members of his church in 2009.

The “witches” left the premises hurriedly in the full glare of some congregants after the prophet called down the Pentecostal ‘fire’ on them and scattered an “anointed spray” in the air as he also declared he was not afraid of any evil cult.

Telling Starr News about his latest vision, Prophet Elijah, who has over one thousand videos of some deliverance events he has conducted in South Sudan, Rwanda, Nigeria, Ghana, South Africa and Uganda, said the occultist kingdom had beefed up the tempo of recruiting more schoolchildren and newborns, using camouflaged items to initiate them, to destroy families “as the end-time is getting nearer”.

“I had a vision. The angel of God took me to a place, just like a school. I saw many children, sitting down. About five among the children were having a mark of a beast. They were holding bofrot (a Ghanaian doughnut), toffees, a popular drink and all those things children eat. I asked, ‘What is this?’ The angel said, ‘This is what I have come to show you. There are many of them who are initiating children in school.’ I wept,” he divulged.

The angel, he said, unveiled another scene to him where he saw some children, not older than five years, playing and dancing naked. He did not mention the location.

“He took me again. I was going. I saw some children playing naked. About fifteen of them. They were below 5 years. As they were dancing, I saw around their waists what appeared like beads. But they were not beads. They were snakes, around their waists. I moved closer to one of them and asked, ‘What is this around your waist?’ She said, ‘Oh, it’s beads, given to me by my grandmother.’ The angel told me she had been initiated like that,” the prophet narrated.

He continued: “Then, the angel took me to a labour room. I was standing watching as many babies were being delivered. The caregivers in the maternity room were wiping the stars the babies were born with and replacing them with the mark of a beast. But there were babies whose stars were so bright they could not touch them. The babies they could not touch they just gave them back to their mothers.”

What the initiation means

The initiations shown in the latest vision, according to Prophet Elijah who pitched his ministry in the Upper East region in 2015 after years of mentorship at the Synagogue Church of All Nations under Prophet T.B. Joshua in Nigeria, has serious implications in real life.


“It’s a warning to parents. If you want beads for your children, go to the market yourself, buy them and tie them around their waists. Don’t just take beads from any relative. You don’t know where they have taken those beads to and are asking you to tie them around your child’s waist. Your child has been initiated like that.

Last Wednesday saw a deliverance exercise conducted for some children in the region as instructed by the angel the prophet said he saw in that dream.

Some 405 children attended the deliverance service that had a 14-year-old boy confess he had been initiating his schoolmates with food and sweets. One of the children said she used the “spiritual eyes” given her after her initiation to collapse a store being run by her mother. And another child claimed responsibility for her father’s failure to secure a contract she said she “tied” spiritually.

The prophet who, despite pleas and resistance from some of the juveniles not to disengage them from the occultist realm, executed the job said to have been assigned by the angel and took away some “evil beads” from the waists of many children during the service, also stressed the need for parents to always fast, pray and seek support only from men of God.

“Anybody with that mark of the beast in this end-time is in a serious problem. Beating cannot solve it. Instead of some parents taking their children to a pastor, they would still take that child to a native doctor, a mallam or a soothsayer. The witchdoctors get their powers from the witches to operate. How can you then take something demonic to someone who uses demonic powers to operate? If their pastors cannot deliver the children, they can locate another pastor who can deactivate the eyes of witches being used to destroy,” he emphasised.

An ‘endorsement’ from T.B. Joshua

Prophet Elijah, in the testimonies of some residents, is generally simple to approach. He is not rich, yet he generously gives the tithes his church brings to him back to orphanages.

The prophet, who has always referred to Prophet T.B. Joshua as his spiritual father, does not charge those who consult him for spiritual diagnosis and guidance. And, despite harsh criticisms even from some of his fellow servants of God in the region against him, he hardly condemns any pastor.
It is said that a man from Navrongo, a busy capital in the region, once consulted him for deliverance. Not confident of a ‘simple’ procedure the prophet prescribed for him, he abandoned that assignment and travelled to the Synagogue Church of All Nations in Lagos.

But when Prophet T.B. Joshua himself approached him during his usual random one-on-one prophetic talks in the packed auditorium, he told him to return to Ghana and do exactly what a prophet had asked him to do.

“The man was jobless for a long time and was always blaming his innocent wife for his condition. He was only asked to fast and to give some little alms to beggars anywhere. He didn’t appreciate that little solution, thinking it wouldn’t work. So, he managed to travel to Nigeria. He came back and did what he initially rejected. After doing so, he was called to Accra for a job. He’s a big man now in Accra,” said Johnson Ayamba, a civil servant in the region.