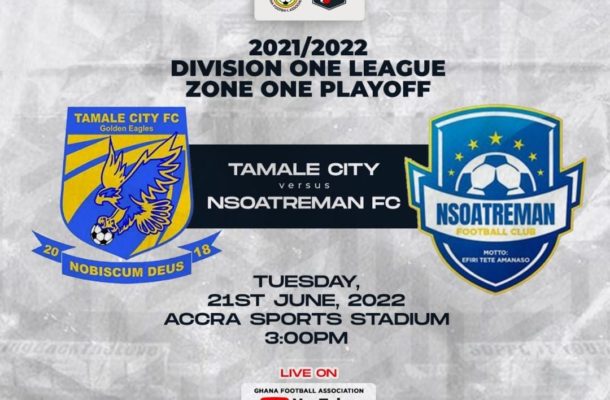 The Division One League Zone One Playoff match between Nsoatreman FC and Tamale City will be played on Tuesday, June 21, 2022 at the Accra Sports Stadium as earlier communicated.

At the end of the League season, Nsoatreman FC and Tamale City FC both had 71 points and even on head-to-head after winning their 1-0 at their respective home grounds.

Per the Division One League Regulations, winner of the play-off match will gain promotion to the Ghana Premier League.

The match will kick off at 3pm and will be live on the Ghana Football Association Youtube Page.

Meanwhile, the GFA Disciplinary Committee has dismissed Unity FC’s sprotest against Nsoatreman FC in relation to the Matchday 30 game played at the Twumasi Sports Complex.

Unity FC protested against Nsoatreman FC for failing to submit its audited accounts for the 2020/21 league season before the start of the season.

The protest was also found to have been filed out of time.