Tariq Lamptey talks about leaving Chelsea and his International future 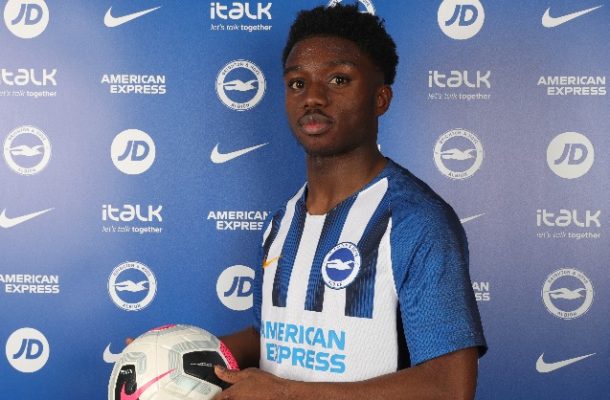 I’m not someone who’s going to be fazed by anything. I’m fearless,” says Tariq Lamptey. With that broad smile, that baby face and the fact that Lamptey is just 5ft 4in tall it might sound a little incongruous, but the 19 year-old has made a remarkable start to his Premier League career.

“Love Lamptey!” tweeted Telegraph columnist Jamie Carragher after the Brighton defender collected his second man-of-the-match performance in two league games so far this season, having torn Newcastle United to shreds with his speed, skill and, yes, fearlessness in an impressive 3-0 away win. “This kid doesn’t have limits,” team-mate Neal Maupay stated. It was the same in the defeat at home to Chelsea. Just ask Marcos Alonso.

Lamptey took a buffeting at St James' Park and had to come off after under an hour but the damage was done; the game was won and with Newcastle manager Steve Bruce later admitting he already “knew all about” the right wing-back before the game. But still his team could not stop him.

They tried. Lamptey was continually fouled but, ahead of facing Manchester United at home on Saturday lunchtime - for which he is expected to be fit - he has an answer to that also. “The type of character I am, I am stubborn and I am not going to complain too much so it’s part of the game,” he says. “If you whack me I just keep getting up.”

Maybe that stubbornness was evident in January when Lamptey took the bold decision to turn down a new contract at Chelsea, where he had been since he was eight years old, and join Brighton on deadline day in a permanent deal until June 2023. Chelsea, knowing what a talent they were losing, said they were reluctantly “respecting his wishes”.

The fact it cost just £3 million – an initial £1.6m plus add-ons – is extraordinary given the nought Lamptey has probably already added to his valuation. But his deal was up in the summer, there was Cesar Azpilicueta and Reece James ahead of him and, despite having already made his league debut to glowing praise from head coach Frank Lampard for the impact he made, Lamptey knew his mind.

“I had been there from a really young age so it was not an easy decision to make but you get to a point where you look at what the best thing is for your career and you speak to your family members and the people around you who help you and how you can take your game to the next level and how you can improve,” Lamptey explains. “As I person I am a really ambitious boy. I am not one to sit back and rest on my laurels. I want to keep going and keep driving forward so I felt it was the right time for me to make the move and come to a club like Brighton which hopefully can give me the opportunity to develop into the player I know I can be.”

So just 33 days after coming on as a substitute in Chelsea’s 2-1 win over Arsenal, helping turn around a 1-0 deficit, Lamptey turned down other offers – with Patrick Vieira’s Nice, in particular, believing they would sign him – to join Brighton.

As well as manager Graham Potter’s progressive football, it helped that the club’s technical director is Dan Ashworth who had held a similar role at the Football Association and had tracked Lamptey through the England Under-18s, U19s and U20s. Born in London, Lamptey has now made his debut for the England U21s while Ghana, who he qualifies for through his parents, want to call him up to their senior squad.

“No. At the moment I’m just focused on Brighton and playing as many games as possible, keep training as hard as possible, keep playing well and keep a consistent level,” he says, batting away the question. “What happens in the future on the international side, we’ll have to wait and see.”

Interestingly, that sounded like no decision has yet been made on his international future? “No. I’m still young so I’m just looking forward to the next game which is United and keep playing as well as possible. Whatever comes next, we’ll see,” Lamptey – who turns 20 next Wednesday – insists. The FA should take note.

Given his impact, it is incredible to think that Lamptey has still only made 10 league appearances for Brighton and had to wait for his chance, not featuring until the goalless draw in June away to Leicester City. Lamptey has not looked back and – given his self-belief and dynamic style of play - it is not surprising to hear which players were his childhood heroes. “As idols, Ronaldinho and Dani Alves,” Lamptey says.

“I loved the way they had a positive outlook on football. They were always smiling. They had so much flair and loved attacking. Ronaldinho had the attacking skills and loved playing with a smile on his face.

“Dani Alves was the same. He was always attacking and for a full-back he got forward quite a lot and played with so much flair. Those were the two players that I looked up to. And, of course, my dad.”

The sacrifices made by Lamptey’s parents who took him “up and down the country to training sessions” clearly mean a lot. There are two memories, in particular, that stick with him. “The little things like my mum picking me up from school, having food in the car and heading straight off to training because the traffic was so bad on the M25. Little things like that,” he says. “Or my dad training me early mornings before school.”

It was at school – Queensmead School in Ruislip, West London – that Lamptey’s sporting prowess became noticed, not least his pace as he was encouraged to take part in athletics events. That pace was on view against Newcastle as he clocked a top speed of 22.8mph, making him the Premier League’s fastest player last weekend.

"I didn't know that,” Lamptey said. “There's a lot of very quick players and fantastic players like that. I'm privileged to be put in the same bracket as them, but there is still faster to go so we'll see."

Lamptey’s appetite to learn is evident. He is, for example, pleased that Bruno Salter, Brighton’s former long-serving right-back and captain, is now part of Potter’s coaching staff. “Bruno is a fantastic person to learn off. He has so much experience of playing at the top level of the game. I'm always trying to talk to him,” Lamptey says. “I'm almost like a sponge with him.”

Above all, though, he will remain fearless: “That’s just me as a person. I am not fazed by the environment I am in or who I am playing up against, I just want to give my best for the team, and play as well as possible.

“Each time you step on the pitch you go on there to become a better player. I am always doing extra to try and improve my game and try and perfect my craft.”