Teamwork to disenfranchise and rig elections; symbiosis among EC, NIA and the president 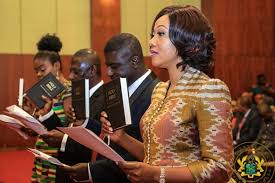 The Caucus for Democratic Governance, Ghana (CDG--Gh), has observed, with concern, the desperate desire and attempts by EC and NIA to disenfranchise Ghanaian voters. The possible reason – we believe- is to rig the 2020 elections in favour of a Government, whose strengths lie in corruption, incompetence, mismanagement causing insecurity and militia build up.

1992 CONSTITUTION
It is wrong for EC and NIA using manipulations in their registrations to redefine Ghanaian citizenship for their selfish, parochial and political interest. The 1992 Constitution certainly defines the qualification of a Ghanaian. There is no doubt whatsoever. Under the fourth Republican Constitution, we have had five Presidents including Akufo Addo. Under the first four Presidents (Rawlings, Kufuor, late Prof Mills and Dramani Mahama) we had the voters ID card as the legitimate registration and voting card. Why should it be different under Akufo Addo ? Why should birth Certificate, Passport among others be set aside for a hastily produced Ghana card, which aims at disenfranchising millions of Ghanaian voters? Besides the so called Ghana Card, which is correctly called ECOWAS Identity Card, might even induce non Ghanaians to register. Why is the EC twisting our fingers?

SHIFTING OF POST
On assumption of office, the first thing Madam Jean Mensah did was to struggle for the code to the data system of the equipment being used by the EC. When that was not possible, she decided on a new biometric equipment; against major stake holders opinion. When the manufacturers came out to confirm the credibility of the equipment in a letter, she quickly decided there is the need for facial recognition technology to eliminate manual verification. Without any consultation with IPAC, she selected three Companies, for a new equipment for a new register. After shifting the post in several unconvincing directions, she decided to send a Constitutional Instrument ( CI) to Parliament to legitimize her voter`s registration, where Ghana card is requisite. Why this desperation?
FORMER PRESIDENTS
The question is; why this desperate effort to use Ghana card instead of voters ID or birth certificate or passport? All the four previous Presidents (from NDC and NPP) agreed to use the voters ID card. Why is Jean Mensah bent on using the Ghana card meant to disorganize the people and steal their franchise? Is it likely, that Jean Mensah has “a charge to keep”? A charge to rig the election for the President, who unprovoked sacked Charlotte Osei and replaced her with Jean Mensah as EC.

THREE EC`s IN 4TH REPUBLIC
We have had three Electoral Commissioners in the fourth Republic. Dr Afari Gyan was the first. He served under Presidents Rawlings, Kufuor, Prof Mills and John Mahama until he retired. After retirement Charlotte Osei became EC. Ghana a country with enviable record in democracy; we had hoped, that wisdom would direct Nana Addo to keep Madam Osei in office to strengthen our democracy. Instead she was willfully sacked.

PETITION
A petition for the removal of Madam Charlotte Osei, which falls short of legal mandatory requirement, was sent to the President. The President shows interest and functions as legal consultant, calling on the petitioners to rectify legal errors. The absurdity of the dismissal, comes to play, when one considers that the petition had major flaws. It carried no valid signature. It had no date and one of the petitioners whose name was George Adgya, died many years before the petition. The petition, which was still not properly constituted was sent to the Chief Justice. The Chief Justice, establishes a prima facie case and constitutes an ad-hoc Committee to look into the issue. The Committee`s report sent to the President, led to her dismissal by the President.

.
SECRET VOW
Overwhelmed by her new unexpected elevation to EC boss, Jean Mensah from day one, must have vowed to powers that be, to reciprocate the goodness and mercy shown by the President. The calculated attempt to say thank you, using the instruments of her office, seeks to rig the election and give Nana Addo another four years on silver plate. To arrive at this aim, the EC and NIA (NIA is directly under the President) through their registration manipulations are disenfranchising the Ghanaian voters. This is an affront against the tax payers whose taxes are used in paying the EC. The autonomy of EC is therefore not above the wishes and interest of the tax payer.

INTOLERANCE
Why is the President highly intolerant? Why has he surrounded himself with clan members and people who are prepared to bend the rules to his advantage? Why is he often being misled? Why is corruption destroying the country? Why are budget figures to Parliament different from those sent to IMF? Why are polished macroeconomic figures being used to create the wrong economic impression? Ghana is for Ghanaians not for Akufo Addo or the Akyem clan as some of his Ministers would want us to believe. It is an open secret, that the President as a result of Ayawaso by-elections and other incidents which have happened under his rule, ought to have resigned, to set good example for our children and future leaders and politicians.