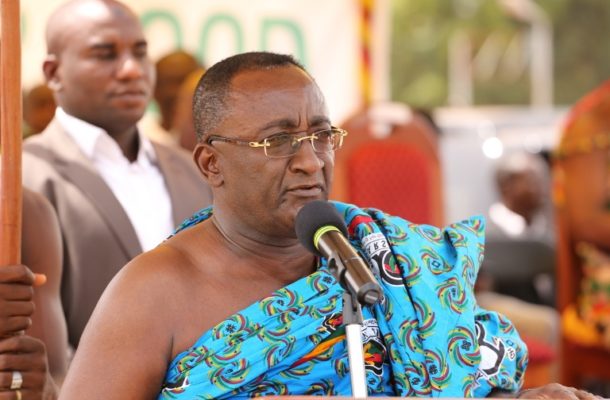 Indeed, it takes only a visionary leader with very good foresight to be able to identify and select the best kind of people to work with.

When Nana Akufo Addo said "We have the men", little did we know that he was talking about men who have gone through the mill, and have stood the test of time. Men who have excelled in all spheres of life; being academia, social and political. Great men who possess extraordinary competence and unquestionable expertise to man our various sector ministries and agencies.

Today, with the records available, I can confidently say without any iota of doubt that the best among all these great men is Dr. Owusu Afriyie Akoto, the Minister for Food & Agriculture. And that he is the best thing that President Akufo Addo has given to Ghana, Africa, and the World at large.

It is undeniable fact that in 2017, the Akufo Addo-led administration came to meet a suffocating economy of which the Agric sector was not an exception with zero innovative ideas to resuscitate it from its dying state.

It took the president and his competent Agric Minister to roll out a program to help modernize the backbone of the Ghanaian Economy (Agriculture) to create more jobs and food to give life back to the dying economy.

With the over Two (2) million jobs created by the Planting For Food & Jobs Program, and Ghana been described as the Food Basket of West Africa, the records are there for every discerning mind to read and appreciate why Dr. Owusu Afriyie Akoto is touted as the best Agric Minister that President Akufo Addo has offered to the World.

At the peak of the COVID-19 pandemic with its associated lockdowns and restrictions, we all realized the usefulness of the ingenuity of the Agric Minister; where Ghana became a hope and agricultural iconic country for many West African countries. We had food that sustained us throughout the heat of the pandemic when some West African countries were going through starvation as a result of their inability to import enough food from other countries due to the pandemic and its related import restrictions.

It was no surprise to hear Mr. Sam Jonas describing the Agric sector as the only sector that has been of immense help to our economy during the pandemic.

Time will not permit me to enumerate the wonderful contributions that the Dr. Akoto led Agric ministry has played in the sustainability of some of the President Akufo Addo key flagship programs such as the Free Senior High School (FSHS) and the One District One Factory (1D1F) Programs among others.

Putting the welfare of our farmers first, and creating a conducive environment for them to continue to offer their peerless contributions to the growth of our economy, President Akufo Addo led administration under the ingenuity of the Best Agric Minister Ever, have instituted a Pension Scheme Program for our hardworking Cocoa Farmers across the length and breadth of this country; something that has made farming more lucrative and more appetizing for our Youth than it used to be in the previous years.

Indeed it takes great men to break records and set new ones. As I'm typing right now, Dr. Afriyie Akoto led Ministry has broken an old record and has set a new unprecedented record by recording over 1.3 million metric tonnes of cocoa with almost ten (10) more weeks to close the cocoa season this year. An old unprecedented record that was set during Prof. Mills' administration.

It is only a man like Dr. Owusu Afriyie Akoto who can engineer such an achievement for his country. Dr. Akoto is an achiever who has achieved the best for the Akufo Addo-led government.

It is therefore not out of place to show appreciation to our President, His Excellency Nana Addo Dankwa Akufo Addo for given us the Best Agric Minister Ever.

Ghanaians are extremely proud of you and your fantastic and reliable Best Minister, Dr. Owusu Afiriyie Akoto.

No wonder you describe him as your bosom friend with whom you can gladly rely on to achieve all the dreams you have for this country.