The Blind Pass: League soldiers on as fear and panic hover over Ghana football 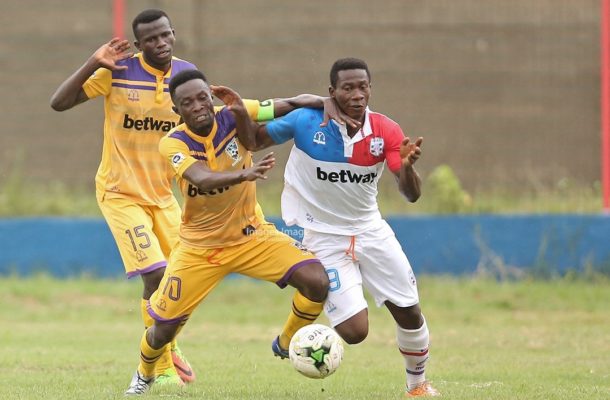 The penultimate matches of the Zylofoncash premier league were honoured on Wednesday and Thursday respectively. It was a penalty-fest as 6 penalties were awarded and converted across 8 league venues.

Eleven Wonders were at their scintillating best at home as they saw off Berekum Chelsea at the Techiman park. Two first half goals from Ben Owusu and Abdul Fatawu Safiu settled the game before recess.

Erstwhile league leaders Ashanti Gold SC had to dig deep to overcome Dreams FC by a lone goal to keep the chase on. Shafiu Mumuni scored just after the break to hand the host all three points.

Medeama SC hit Wa All Stars for 4 at the T and A park. Kwame Boateng and Kwesi Donsu both got a brace in a game Medeama dominated from start to finish. Richard Arthur’s goal only came as a consolation for battered All Stars.

Elmina Sharks and Ebusua Dwarfs renewed their intense rivalry when they locked horns at the Nduom Stadium on Wednesday. Twice Sharks lead but they were twice pegged back by Dwarfs to end the game 2-2. Not only was the score even, Yakubu Mohammed and Amos Nkrumah scored a brace each to cancel out each other.

Liberty Professionals and Asante Kotoko played out a 1 all drawn game at the Karl Reindorf park. Former Kotoko defender Tuffour Frimpong put Liberty in front from the spot. Liberty’s didn’t last long enough as Amos Frimpong also converted expertly from the spot to level things up.

Champions Aduana Stars pipped fellow Brong Ahafo compatriots Bechem United by a goal to nil on Thursday. Abu Sadiq scored to ease the pressure on the defending champions who have found life so difficult this term with continental responsibilities.

Inter Allies were second best in possession terms but they did enough to secure maximum points against Hearts of Oak. Richmond Lamptey scored a beauty from range against the run of play to down the phobians.

LEAGUE SOLDIERS ON AS FEAR AND PANIC HOVER OVER GHANA FOOTBALL..

Ghana football has been plunged into a state of a kerfuffle with its chief Kwasi Nyantakyi under investigation for defrauding under false pretense. This development has sparked up a heated discourse with stakeholders divided over the short, medium to long term ramifications of the scandal. The Ghana Football Association has long been seen by many as an entity encapsulated in gross corruption. With these allegations hanging over the head of the FA president, it’s only a matter of time before the perception of a chunk of the populace is confirmed or deemed erroneous.

However the zylofoncash premier league has continued unabated in the midst of all the brouhaha. The competition has gotten even keen with teams and players upping the ante the first round draws to a close.

Quite a host of players were at the double as penalties were awarded in rude abundance in week 14. Medeama SC were the biggest winners on match week 14 as they put 4 past one time champions All Stars, conceding one in the process. They have by this feat maintained top spot going into the final games of the first round. Two stalwarts who have made Medeama SC thick this season are Kwesi Donsu and Kwame Boateng. Coincidentally both players were at the double in goal scoring on the day as Medeama walloped All Stars.

A pulsating game in Edina had everything the average football fan looks out for in a game, the goals, crunch tackles, strange calls, nerve-racking moments, the thrills and chills in the stands to mention but a few. Only few games could guarantee you all these the world over and the central regional derby between Elmina Sharks and Ebusua Dwarfs is definitely. Their rivalry which dates back from their time in the lower tier cannot be overemphasized. On a rather positive note, most of a lot of the battles happened on the field unlike in the past where hooliganism and crowd violence always took centre stage. The battle on the field was keenly contested with Yakubu Mohammed and Amos Nkrumah seizing the initiative on the day. Twice Yakubu Mohammed put Sharks in the lead but each time Amos Nkrumah responded in a fascinating even encounter.

An age old conundrum which has bewitched Ghana football is the art of converting penalty kicks. From national team level to clubs, the country has suffered painful exits and/or missed out on various milestones just because we simply cannot keep a calm head and maintain the necessary composure in dispatching penalty kicks. Surprisingly out of the ordinary all 6 spot kicks awarded on match week 14 in the Zylofon Cash premier league were converted with aplomb. Amos Frimpong, Tuffour Frimpong, Amos Nkrumah and Kwame Boateng and Kwesi Donsu were the men with the cool heads in week 14. In a typical shootout situation Ghana would have been home and dry with 5 expert takers. Though strange this is a huge boost in our quest as a country to bury our perennial penalty nightmares.