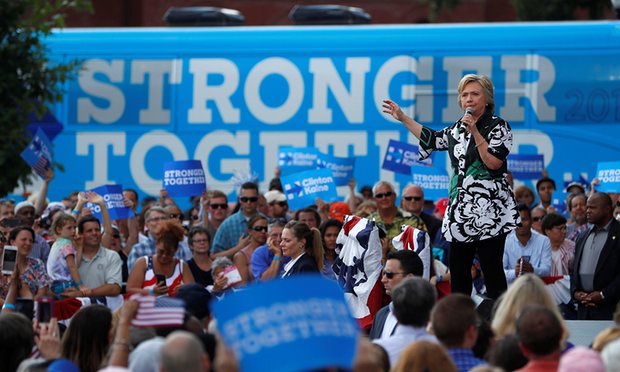 The Brexit vote rocked the UK’s political establishment, stunning an elite that had taken voters for granted. Having spent a couple of weeks in the US and attended the Democratic convention, I fear the complacency that led to the UK establishment being turned upside down could be repeated in the White House race. There is no such thing as an established order in politics anymore, and that benefits populists such as Donald Trump. If Brexit taught us anything, it’s that nobody should just assume Trump won’t win.

Of course, the United States and the UK are very different countries. Race, for example, is not central to the British political debate in the way it is in the US. An MP was recently shot and killed in the street, but we do not have a serious issue with guns. The Brexit vote was also the culmination of the collective failure of political leaders, of all parties, to make a convincing case for the European Union over the last 40 years.

But the parallels between support for Brexit and backing for Donald Trump are striking. Populist leaders promising simple solutions, fuelled by angry rhetoric about immigrants and the establishment, are central to both. Supporters of both Brexit and Trump, with exceptions, tend to be those who feel the world has passed them by. Both campaigns focus on the need to restore national pride, calling for a return to a lost sense of greatness that probably never existed in the first place. Time and again during the EU referendum those advocating a Brexit vote urged us to “take our country back”. The parallels with “make American great again” are obvious.

A terrifying disregard for facts and experts is also a hallmark of both campaigns. Michael Gove went so far as to claim that Britain had had enough of experts. Time and again, both the Brexit and Trump campaigns not only deliberately misinterpret the facts but flat-out lie. Any expert who contradicts their claims is dismissed as being a paid-up member of the establishment with a vested interest in the status quo.

The response from the political elite on both sides of the Atlantic is similar, too. In the UK, too many on the remain side dismiss Brexit supporters as racists and bigots. Yet for the vast majority of those troubled by immigration, it is the economic consequences of open borders that is their key concern.

Brexit proves what can happen when the political establishment loses touch

For those of us who believe in the benefits of immigration, we must set out how we will substantively address concerns about jobs, working conditions and public services. Just dismissing these fears did not wash in the UK and contributed to the Brexit vote.

So too on my travels in the US I have heard all Trump supporters lumped together as racists, particularly by those in Washington DC. Again, there will be racists amongst Trump supporters. How could there not be when the man at the top of the Republican ticket has been so anti-Muslim and anti-Mexican, to name just two groups? Yet economic insecurity lies at the heart of the Trump phenomenon. The sense that jobs have been shipped abroad, that the benefits of free trade aren’t being felt by ordinary families and that immigration has fundamentally altered American society for the worse is palpable.

The stories you need to read, in one handy email

No matter who wins in November, the underlying issues will remain. Communities left behind by globalisation will continue to feel cut off. People angry at what they consider to be too much immigration will continue to express their frustration. And those in insecure, low-paid work will still be anxious about their future.

In the UK those of us who backed a remain vote cannot wallow in having lost or in seeing the negative consequences we predicted actually occurring. The 17 million UK citizens, including more than 1 million people in Scotland, who sent the establishment a resounding message must be listened to.

So my hope is that the Clinton campaign won’t repeat the UK’s mistakes. Brexit proves what can happen when the political establishment loses touch. One thing we learned during the EU referendum is that facts and figures alone aren’t enough. Yes, the overwhelming weight of evidence was on the side of a remain vote being in the best interests of our country, but people also wanted to hear about values and first principles. The Clinton campaign must, of course, continue to set out the hard-headed economic reality of a Trump victory, but they must also speak to their values.

The convention message that love beats hate, that the country is stronger together, is simple but powerful. Every statistic, every fact, every endorsement should be couched in terms of these values. Those of us on the remain side didn’t speak nearly enough about our values and why they aligned with those of the majority of the people in our country. For the sake of future generations of Americans, and for the sake of the global order, I hope that Hillary Clinton learns the lessons of the political earthquake across the Atlantic.