The dynamics of the GFA Presidential Elections 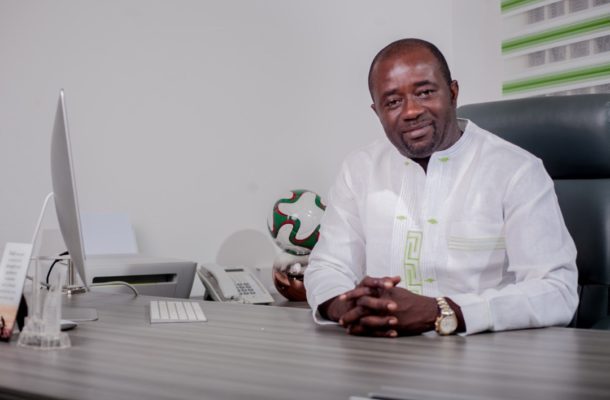 Last week, Executive Chairman of Dreams FC Kurt Okraku announced his intentions to contest the upcoming GFA elections, bringing finality to a long period of speculation over his interest in the seat that has seen no occupant since Kwesi Nyantakyi’s unceremonious exit.

In a video declaration posted on his various social media handles, Kurt Okraku said “after a thorough process of deliberations, discussions, engagements and consultations with various stakeholders of our industry, I have decided to put myself forward to contest the leadership of the Ghana Football Association when the election process officially opens.

“My ultimate aim is to ensure that industry players in Ghana get their fair share of the enormous global wealth of football. That every person connected to the game reap their rightful dues for their unending efforts and enormous investments. I will in the not too distant future share with stakeholders my elaborate blueprint on my vision for Ghana football.

In his statement, Kurt made mention of ‘thorough process of deliberations’ with stakeholders’ and we understand one of such deliberations was a possible merger between him and one of the candidates but talks broke down with neither side willing to surrender his ambition of being Nyantakyi’s successor.

Kurt’s disclosure takes to six the number of personalities who have made known their intentions of vying for the GFA Presidency but we take a look at how his announcement could affect three of the candidates.

From the comfort of his home, Kwesi Nyantakyi will be watching with keen interest as two of his protégés battle a former ally (George Afriyie) and a young and relatively new face (Nana Yaw Amponsah) for the seat he sat on for 13 years.

Ideally, Kwesi Nyantakyi would wish that his two ‘sons’ (Osei Kwaku Palmer and Kurt Okraku) join forces to beat the others but his wish would remain as it is because Kurt and Osei Kwaku Palmer both couldn’t reach a compromise over who becomes the President and Vice should they become partners.

For this reason, they are both heading into the elections as ‘independent’ candidates with an objective of succeeding their ‘father’.Kwesi Nyantakyi’s exit may not be as glorious as his supporters would have wanted but the fact is, he still wields influence on most of the persons who would turn up as delegates and vote on the day.

Kurt and Osei Kwaku will surely benefit from the power or influence of their father on some of the delegates but by deciding to go solo they will now have to share the votes.

The two men will without a doubt receive blessings from the dethroned Nyantakyi but the decision to go their separate ways means that votes from pro-Nyantakyi will be split and that will obviously be good news for the other candidates.

George Afriyie may pay for divorce with Nyantakyi

At some point, Nyantakyi and George were the ‘perfect couple’ in Ghana football. It’s a marriage that seemed flawless until a text message from George Afriyie to Nyantakyi which contained some unpleasant words and the accusations made its way into the media space.

George Afriyie’s decision to announce his decision to stand for the GFA Presidential election at a time when Nyantakyi was having a rethink on his earlier promise of not seeking reelection is said to be the last straw that broke camel’s back causing an irreparable damage to a relationship that was once the envy of many in the football space.

George Afriyie is seen as a traitor in the eyes of some people who belong to Nyantakyi’s camp and will use the election to pay him back.

Kwesi Nyantakyi will also be pulling strings to ensure that the man who allegedly accused him of ‘selfishness’ and ‘greed’ does not get the honour of being his successor.

And if there were some members of TeamNyantakyi who had issues with Parmer and for that matter may consider George as an option, Kurt’s announcement will come as good news to them.

Nana Yaw should be worried

A major part of Nana Yaw Amponsah’s campaign has been his ‘newness’ on the GFA political scene and the fact that he is a breath of fresh air who is coming with ideas that will mark a complete departure from the old ways of running football in the country.

It’s a message that resonates with many Ghanaians including some ‘football people’ who want the old ways of running football to remain in the past.

Unfortunately for Nana Yaw, the arrival of Kurt means he will have to share the votes of the persons with that school of thought with Kurt who has gained loads of admiration with his running of Dreams FC and the MTN FA Cup.

The FA Cup is viewed by many as a better-packaged commodity than the Ghana Premier League and Dreams FC has basically become a model club for some clubs in the country thanks to the ingenuity of Kurt Okraku.

Again, unlike Nana Yaw who is perhaps seen as outsider and may not have ‘constituencies’ within the football fraternity, Kurt is seen as an insider with an outsider mindset.

Though he has for so long a time been in the football space, he has unique way doing things that always get results and has also built a decade-old relationship with some of the delegates.

Should all these men be cleared by the Elections Committee, we would be in for the hottest and most keenly contested elections in the history of Ghana football.