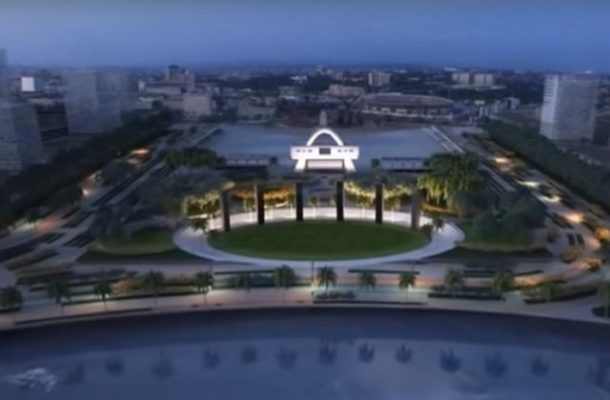 President Akufo-Addo says in line with the Ministry of Tourism, Arts and Culture’s target of generating jobs, especially for the youth and unemployed, the Marine Drive Tourism Investment Project, from construction to the operational stage, is expected to employ some 150,000 people.

Expressing his appreciation to all who have in diverse ways helped to ensure that the Marine Drive Tourism Enclave becomes a reality, the President said he was expectant that the project will be completed on time.

Ghana is planning for one of the most iconic and ambitious projects in the history of its Tourism investment, which is estimated at 1.2 billion U.S Dollars. This massive project is going to be a game changer in turning the fortunes of Tourism in Ghana, thereby improving the country’s GDP.

The iconic project is expected to boost local tourism in Ghana as well as create jobs for those within the catchment area of the project, thereby improving the country’s GDP.

President Akufo-Addo indicated that countries all over the world which have coastlines have built magnificent edifices facing the oceans which is a contrary situation in Ghana, adding that his administration would change that phenomenon in this direction.

The project which is dubbed the “Marine Drive Tourism and Investment Project,” is under the auspices of the Ministry of Tourism Arts and Culture, in collaboration with the Ghana Tourism Authority (GTA) and the Ghana Tourism Development Company (GTDC) and is expected to create 36,000 jobs during the first phase of the project. Additionally, it would employ about 150,000 people upon completion.

President Akufo-Addo had the privilege of cutting the sod for the construction of the long-awaited project which was on the drawing board for six decades, spanning from the late Dr Kwame Nkrumah’s regime.

The project is expected to cover a total of 241 acres of land, which stretches from the Accra Osu Christiansborg Castle to the Arts Centre in the Gamehsie enclave which is under the Public-Private Partnership (PPP) arraignment.

With the conception of this project dating back to the time of independence, President Akufo-Addo stated that “I am happy that in spite of the many unsuccessful efforts made in the past to undertake this project, today, we are beginning this project.”

He continued that, “It is noteworthy, also, that the required consultations have been done prior to this ceremony. I am happy to hear that the Chiefs have given their full support to the project and that their concerns have been addressed.”

“The architects and planners have ensured that the interests of the public have been factored into the design. They have put in place a network of well-connected, multi-use public spaces, that fit with the surrounding communities,” he noted.

The President continued that, “The architects, Messrs David Adjaye, and Associates, featuring the renowned, world-acclaimed Ghanaian architect, Sir David Adjaye, have also included in this project, a Theme Park, in honour of the founding fathers of our nation, the legendary ‘Big Six’.”

This Park, the President explained, “will be a monument that will celebrate their contribution towards the liberation of our country from colonialism and foreign domination.”

The Minister of Tourism Arts and Culture, Catherine Afeku, says that the Marine Drive Tourism and Investment Project is part of a larger vision to promote a tourism outlook in the country that would be uniquely and distinctively Ghanaian.

She indicated that, the project will reinforce the synergistic links between the tourism industry and other sectors of the economy such as agriculture, fisheries, manufacturing, construction, aviation, insurance and banking sectors, to ensure prosperity is spread to the widest swath of our population and, therefore, all and sundry must endeavor to give it the needed support.

Then in 2014, the then Tourism, Culture and Creative Arts Minister, Mrs Elizabeth Ofosu-Adjare, took it a step further by getting Cabinet’s approval.

But again, it stalled because of challenges with the Allodial owners of the land. And subsequently, the current progress engineered by the Nana Addo Administration revitalized the project.

Meanwhile, the project is anchored on the vision of changing the face of tourism in Ghana and when completed, is expected to feature Hotels, Restaurants, Amusement Parks, a cultural village, Recreational Centres, Malls and a Convention Centre.

The lead consultant to the Marine Drive Tourism and Investment project is the, Messrs David Adjaye and Associates, who is a renowned and world-acclaimed Ghanaian architect, Sir David Adjaye, who has also included a monument that would be built within the project area to celebrate him, and also honour the founding fathers of our nation, who are the legendary ‘Big Six.’