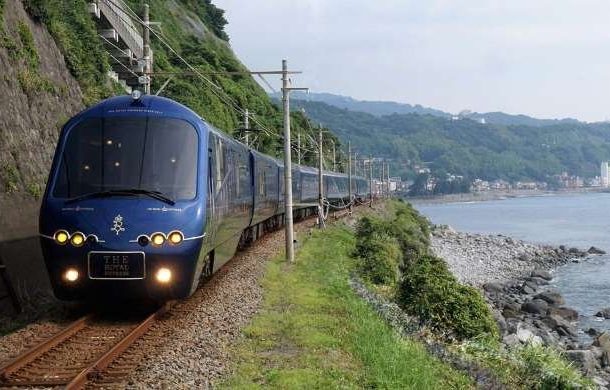 Being catered to usually makes me squirm, but nobody does service quite like the Japanese. When the Royal Express, a sumptuous 100-seat luxury train, pulled out of Yokohama for its journey south along the Izu Peninsula, the uniformed station staff emerged onto the platform to wave us goodbye.

But it was crew member Mia Tomari who impressed me the most. She was so attentive yet unobtrusive that at first I mistook her sole duty to be my personal interpreter and guide. Later, when we disembarked at Shimoda, a small seaside city on the southernmost tip of the peninsula, a large umbrella appeared over my head during a quick rain shower as if by magic.

On board, there were performances of piano and violin music composed especially for the trip. Grown-ups lingered over a multicourse gourmet lunch in the dining car while kids tumbled around their own carriage, which had appropriately scaled seats, a children’s library, and a ball pit. Because the journey is so brief — passengers have the choice between a one-way three-hour ride or a round-trip tour with sightseeing stops and an overnight stay in Shimoda — the Royal Express doesn’t require sleeper cars, so each of the eight carriages is spacious and varied. The interiors were designed by Eiji Mitooka, who has employed wood and washi, traditional Japanese paper, while adding such small surprises as his own calligraphy paintings, which hang in a gold-ceilinged carriage reserved for weddings and private parties. The overall effect is one of old-world glamour.

On one side of the train, panoramic windows reveal seemingly endless ocean views; on the other, undulating mountains and the hot springs for which the peninsula is famous. We were on the overnight itinerary, and an evening of insider experiences was planned. When we arrived at the station in Shimoda, I was welcomed, for the first and probably last time in my life, by kimono-clad geishas bearing flowers.

On a tour of Hofukuji Temple, we were shown the burial site of Saito Okichi, a 19th-century geisha who, legend has it, was made the concubine of the first American consul in Japan against her will. After picking up some locally made sweets, we saw a dance performance in a historic building where Saito briefly ran a restaurant.

Then we checked into Seiryuso, one of Japan’s finest ryokans (Jimmy Carter once stayed there during a presidential visit), where we took a dip in the onsen and swimming pool, before ending the evening with an exquisite 10-course dinner made with such rare ingredients as matsutake mushrooms and whole alfonsino fish.

I bought some of the ryokan’s sake, as well as Japanese pottery. The next day, on the way back to Yokohama, we disembarked in Ito City, a hot-spring resort, for a private concert by a shamisen, or lute, player at Tokaikan, a former ryokan that dates from 1928.

Back on board, after finishing an elaborate sushi lunch prepared by an Ito City restaurant, I wandered from car to car for a last appreciative look and saw the conductor leaning out the window, gazing in wonder at the mist-fringed mountains and aquamarine sea.

I would soon be leaving all this beauty behind, but I’d accumulated enough regional delicacies, from seaweed cookies to red-bean sweets, to recapture the flavor of the trip for a while. the-royalexpress.jp; from $220 per person.