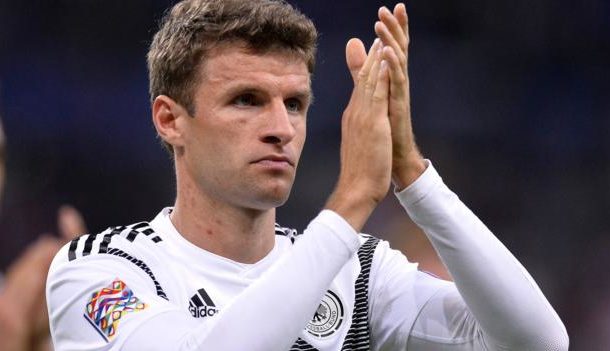 World Cup winner Thomas Muller says he is "puzzled" and "angry" by Germany coach Joachim Low's decision to tell him he will not be selected again.
Low said Muller, 29, along with Jerome Boateng and Mats Hummels, both 30, will not be part of a "new start for the German national team" in 2019.
The players were part of Germany's World Cup-winning squad in 2014.

"The more I think about it, the more the way it was done, makes me angry," Muller said in a video on social media. "The coach's sudden decision obviously left me puzzled. A coach must make sporting decisions, no problem, I do not have a problem with that.
"But it's mostly the character of the decision that I don't understand. Mats, Jerome and I are still able to play at the highest level.
"The press releases of the German football federation and its president [Reinhard Grindel], prepared in advance, were from my point of view in bad taste and showed a lack of consideration."
Bayern Munich forward Muller has scored 38 goals in 100 appearances for his country, winning the World Cup golden boot in 2010.
Germany's next match is a friendly against Serbia in Wolfsburg on 20 March before their first Euro 2020 qualifier against the Netherlands four days later.
Bayern chief Karl-Heinz Rummenigge said he was "irritated" by the timing of Low's announcement.
"We consider the timing and circumstances of the announcement, both to the players and public, as questionable," said Rummenigge in a joint statement with sport director Hasan Salihamidzic.
"The last international match of the German national team took place on 19 November 2018 - three and a half months ago." Source: bbc.com