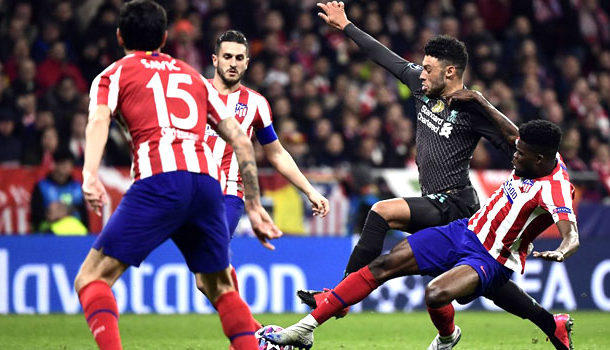 Ghanaian midfielder Thomas Partey was in fine form on Tuesday as he helped his side Athletico Madrid clinch a slender one nil victory over defending Champions Liverpool at the Wanda Metropolitano in Champions League's round of 16 first leg clash.

Athletico Madrid have had a somewhat topsy turvy season thus far winning only two games in 2020 but were in good form on Friday in the league when they managed a 2-2 drawn game against Valencia.

Partey who has been a symbol of the team's recent malaise was in good form against Valencia in the league and was rewarded with a starting berth against Liverpool in the Champions league game on Tuesday where he put no foot wrong on the night under the lights.

The Reds were given a dose of their own medicine as Atletico harried and hassled throughout, limiting them to just two clear chances and no shots on target.

Klopp replaced Sadio Mane and Salah with Divock Origi and Alex Oxlade-Chamberlain but neither made an impact.

Two-time finalists Atletico, who have been on a poor run of form, held on to a fourth-minute lead given to them by Saul. The Spanish midfielder turned sharply to fire home after a corner came off the boot of Fabinho.

The return leg is on Wednesday, 11 March.