Time to tell our success story from the Campuses 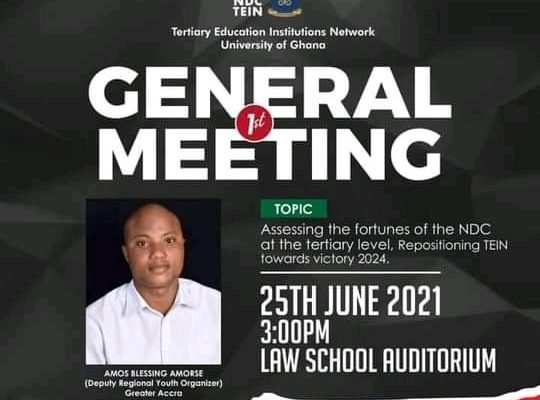 The conversation was at his instance and he spoke passionately about the topic. One thing I vividly remember was his reposte that we needed to find appropriate forum to discuss this issue. I recalled I told him that if there was something the Youth Wing could be accused of not doing since we took over, it was our inability to collectively tell our success story.

Before I was elected deputy Greater Accra Regional Youth Organizer, one of the unpleasant stories I often heard was that the NDC was not attractive to students and that explained our poor performance on the Campuses. Aside our TESCON friends and leading members of the NPP who mostly teased our TEIN members with this unpleasant news, most of the events I attended before the 2018 regional elections had senior members of our Party bemoaned our poor performance on the Campuses.

To satisfy my curiosity, I looked out for polling station results of the 2016 elections for some Constituencies and I was amazed how the NPP whipped us on the Campuses. From that day, I told myself the NPP was justified in mocking us and, our senior Party members had a every good reason to be overly worried about our performance. This 'thing' became a stigma to the extent that some known NDC students could not openly say they subscribed to the social democratic ideals of our Party. There were instances where, for fear of being mocked, some known NDC students joined TESCON.

They could not stand the constant diatribe that NDC did not have intellectuals. In other words, NDC was not intellectuals Party. A picture was painted that if you were a student in the University, the best Party to associate with was the as NPP. The NDC was projected as a Party for illiterates. For some reason, we in the NDC have, somehow, allowed this unfounded claim to go unchallenged. This untruth has constantly been peddled and it has been accepted as the truth because we have not taken pains to rebuff it with evidence.

Immediately after the 2020 elections, an argument between a TEIN and TESCON member on Facebook caught my attention. The TESCON member had challenged the TEIN member to 'name one polling station on any tertiary campus that the NDC won in the 2020 elections." Surprisingly, that age-long "bullet" from the TESCON member ended the argument because our student, perhaps, accepted defeat. This was because he had no evidence of NDC winning any polling station on any campus in 2020.

To my surprise, and here I am referring to polling stations in Greater Accra region, the NDC won in a number of 'campus based' polling stations. Even in University of Ghana which was often cited as a campus we have consistently lost, we won some of the polling stations. Another example is that, the NDC won all five polling stations on Accra Technical University Campus (I will share details of all campus based polling stations at the Legon program) . Because we have not been able to tell this success story, our opponents and some of our own members are still holding on to the claim that NDC does not win on campuses. It should not be the case that our fortunes on the Campuses in the 2020 elections came by chance. No! People worked towards it and at the appropriate time, we will have a full discussion on the contributions of the National Youth Wing, Regional Youth Organizer, Constituency Youth Wing and TEIN Executives and members towards this remarkable achievement.

It is for this reason that the theme by TEIN-UG led by Raymond Edem Tamekloe, "Assessing the fortunes of the NDC at the tertiary level, repositioning TEIN towards victory 2024", is very appropriate and comes at the opportune time. I concede that the theme goes beyond Electoral fortunes, but I believe there will be another opportunity for us to deal with other issues. For Greater Accra Youth Wing, this forum offers us the opportunity to give detailed account of the Party's performance on the Campuses within our jurisdiction in the 2020 elections. I am of the firm conviction that, after Friday, June 25, 2021, no TESCON member and, indeed no member of our Party, will ever repeat the claim that the NDC has been losing the campuses, at least in Greater Accra.

I am one of the regional youth leaders who have had problems with TEIN Executives for organizing funfair programs only for speakers to mount podium, sing, say all the nice things, call for applauds and walk away. I foresee that the theme for this very program will not be one of such programs but a platform to TELL OUR STORY, rebut the age-long half-truth and share ideas on how to reposition TEIN. JOIN US!