Top Ghanaian Footballers Who Played in Serie A 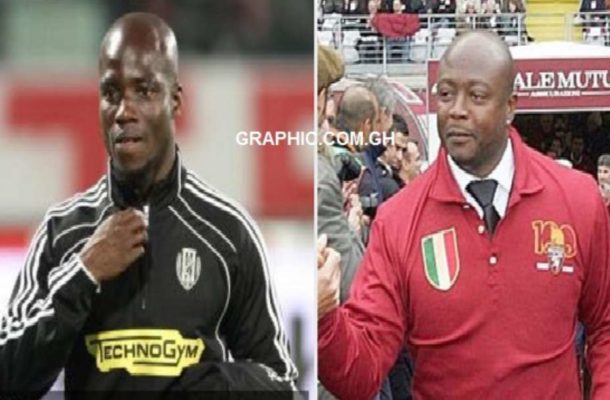 Ghanaian football players have enjoyed success all over the globe but they have had a particularly strong impact in Italy over the years.

Rewind back to 2014 and five of the 23-man Ghana squad that were called up for the World Cup in Brazil plied their trade in Serie A.

With that in mind, let’s take a look at some of the best players from Ghana to have graced the Italian top flight.

In recent years, Juventus have waivered. However, despite finishing fourth in the league last year, Juventus have been installed as the early odds-on favorites by the bookmakers with odds of 11/10 in the football betting markets to win this years’ scudetto. Meanwhile, second-favorites Inter Milan are at odds of 7/2 to steal the title. Though competition is a little tighter this time around, it's worth remembering that, impressively, the Asamoah played a crucial role in Bianconeri’s successful run of nine straight Serie A titles between 2011 and 2020. In addition, Asamoah has spent his entire professional career in Italy playing for the likes of titans like Udinese, Juventus, Inter Milan, and more recently Cagliari.


Michael Essien enjoyed a trophy-filled career, picking up 11 major honors during his spells at Lyon and Chelsea. He switched from Chelsea to AC Milan in 2013 and spent a year-and-a-half at the club. Unfortunately, the team wasn't at their best at the time and he left Italy empty-handed. That said, his contributions to the overall form of the side were significant and he made a solid impression, enough so to land him a ludicrous wage at his next club, the Greek side Panathinaikos.


Also at AC Milan at the same time as Essien was Sulley Muntari. The former Portsmouth man won eight trophies at Inter Milan before making the switch to the red and black of their rivals. Like Essien, he left without any silverware after three-and-a-half years at the club but will always be fondly remembered in the black and blue side of the city.


Emmanuel Agyemang-Badu was a regular for Ghana between 2008 and 2017, making a total of 78 appearances and scoring 11 goals. After starring in the Ghana Premier League, the midfielder switched to Italian club Udinese where he spent a decade scoring 11 goals in 170 appearances.


Afriyie Acquah joined the Italian side, Palermo, from DC United FC in the early stages of his career and spent a total of three years with the club. After a stint in Germany with TSG 1899 Hoffenheim, he returned to Italy with Parma, where he helped to guide the club to a sixth-place finish before suffering relegation a year later.

He spent a year at Sampdoria, then enjoyed a three-year spell at Torino, where he helped the club to consecutive top-10 finishes, and a year at Empoli. The midfielder made 194 appearances in Serie A, scoring ten goals.


Pele remains a cult figure in Turin following a two-year spell at Torino between 1994 and 1996. He had already enjoyed great success in France, winning the French league twice and the Champions League with Marseille before heading to Lyon and then Italy. The attacking midfielder was voted African footballer of the year three times and ended his career in the UAE where he scored 18 goals in 31 games for Al Ain FC.

Other notable players who enjoyed success in Italy are Hertha Berlin’s Kevin-Prince Boateng, who picked up two trophies in Milan and also played for Sassuolo and Fiorentina; and Stephen Appiah, who played for six Italian teams winning two trophies.

These are just a few of more than 30 Ghanaian players who have featured in Serie A. We're sure that this roster of iconic players will only continue to grow over the coming years.