TRAGIC: Woman bleeds to death after husband locked her up to give birth at home 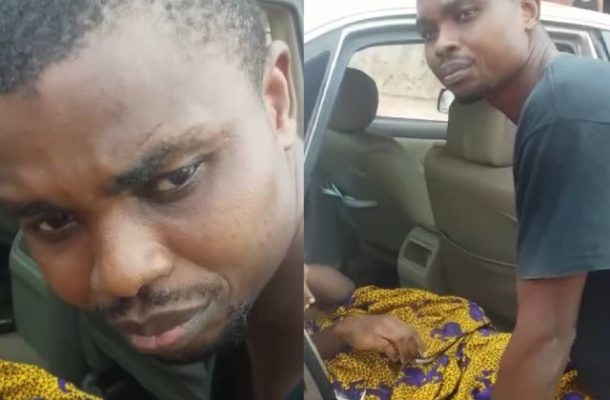 The Nigerian police have arrested one Samuel Chidi for watching his wife bleed to death in their home after refusing to take her to the hospital to give birth to their 3rd baby.

According to resident of the compound where the couple stayed, Chidi had previously watched his wife deliver twice though Caesarean section.

With this 3rd pregnancy, he decided that she must not go through the pain of Caeseran section again and so he contracted a patent medicine dealer who came to their home to deliver his wife of their baby.

The patent doctor administered improper injections on her, dragged out the baby to the ground while the husband pinned her legs down, collected the blood, the baby's placenta and hid in his room while leaving the agonizing mother to bleed to death.

His evil deed came to the open when a Nurse who lives in the same compound with him, asked to see his pregnant wife.

The nurse entered their home and asked about the deceased.

Chidi then openned up to her that she had died and that her corpse was in his room.

The Nurse raised alarm and immediately asked that the remains of the deceased be taken to the mortuary while the baby be rushed to the hospital for proper medical attention.

The family of the deceased was contacted soon after and dismayed by the negligent conduct of the man who had sworn to love, cherish and protect their daughter till death do them part, withdrew the body and proceeded to dump it in the man's compound for him to do with it as he had presumably purposed.

The timely intervention of the police saved Chidi from being lynched by his angry neighbors.

He is currently cooling off his heels in the police station.