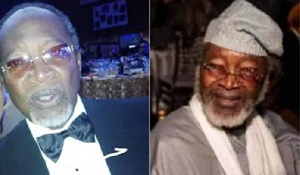 Obileye passed away on Friday, April 24, 2020, leaving the Nigerian entertainment industry grieving amid the coronavirus outbreak.

His colleagues, former producers, among others, have been paying glowing tributes to him.

Among the tall-list of individuals eulogizing Obileye are actor and filmmaker, Tunji Bamishigbin; actor and comedian, Gbenga Adeyinka.

Obileye is remembered for his role in Tade Ogidan’s movie, ‘Hostages’ and the popular television series, ‘Palace’.

In his tribute, he says that he had a relationship that transcended work with the late actor.

He told Saturday Beats in an interview, “He (Obileye) was not just an actor that had worked with me over the years.

“He was a brother and we both cherished the relationship. I had actually planned to visit him in Ibadan before the lockdown.”

“He worked with me on the popular television series, ‘Palace’ in the nineties. We tried to bring ‘Palace’ back about a year ago and we were just waiting to shoot his part in the recording.”

“I pray that God would console his brother, Taiwo Obileye, who is also a good friend and brother of mine.”

“They are both older than me and they never asked any questions whenever I called them for any job,” he added.