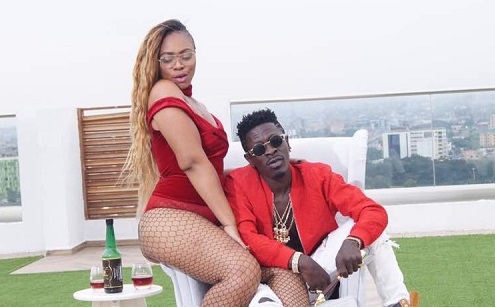 The unsteady relationship between controversial dancehall artiste, Shatta Wale and his longtime girlfriend and baby mama, Shatta Michy has hit the rocks again.

The two made headlines last year when they had a messy break up, exposing and attacking each other on social media while at it.

Later that year, Shatta Wale revealed that they had resolved their differences as Shatta Michy has moved back to his East Legon mansion with their son Majesty.

News trickling in now indicates the two have broken up again and Michy has taken to social media to confirm the reports with screenshots.

According to reports, Shatta Michy, real name Michelle Diamond Gbagonah is said to have left Shatta Wale's home with his newly purchased Range Rover, their son Majesty and some other important documents.

Posting on her instastrory, Shatta Michy wrote “… no one wants to be in abusive, draining relationship”.

In another post she added that “ you have no idea how it’s like dealing with someone who’s always looking for faults on you, they don’t trust cuz they can’t be trusted, insecure, the ego, false accusations, battery, threats, no compassion as I don’t show him all the compassion”.

Seem more of Michy’s revelations in the screenshots below:

The two got engaged in October 2018 when the 'Freedom' hitmaker went down on one knee and popped the question at the launch of his album titled “Reign” at the Fantasy Dome inside the Trade Fair in front of his fans.

The couple who have been together for some years now welcomed their first child Majesty in 2015.