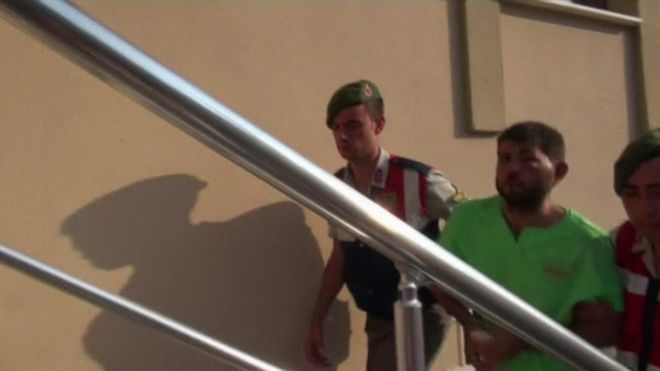 Turkey says it has captured all but one of the soldiers accused of trying to seize the president during last month's failed coup.
Special forces arrested another 11 soldiers overnight after a two-week manhunt near Marmaris.

Recep Tayyip Erdogan was on holiday at the resort in south-west Turkey on the night of the coup attempt, but fled before his hotel was raided.

The fugitives were located in a forested area, reports say.

Since the failed putsch Mr Erdogan has targeted people suspected of links to those involved.
Tens of thousands of people have been detained, or dismissed or suspended from roles in the military, judiciary, civil service and education.


Over the weekend Mr Erdogan announced a sweeping reform of Turkey's armed forces to bring them under full civilian control.

Turkey has summoned Germany's charge d'affaires to the foreign ministry in Ankara to explain why Mr Erdogan was prevented from addressing a rally in Cologne via a video-link on Sunday.

At least 30,000 rallied in the German city in support of the Turkish president.

Cologne police had initially banned the organisers from erecting a large video screen at the demonstration. This ban was partially overturned by a regional court, which ruled that a large screen could be used, but only to relay the speeches of people physically present at the rally.

The right to freedom of assembly did not apply to "the delivery of opinions by a member of a foreign government or head of state via video-link," the court found.