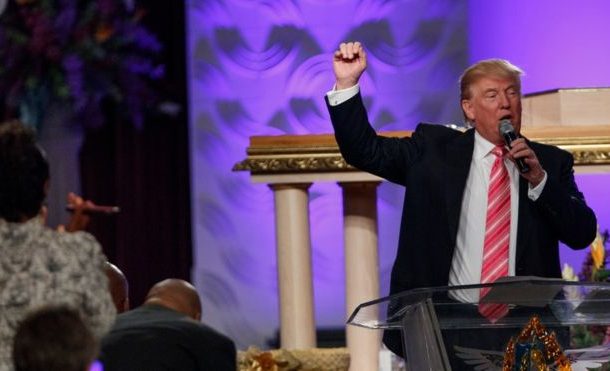 Donald Trump has visited a black church in Detroit in an attempt to claw some of the minority vote away from Democratic rival Hillary Clinton.
He told the congregation he "fully understands that the African American community has suffered discrimination".

Polls say Mr Trump, who is lagging behind Mrs Clinton, has low support among black and Hispanic voters.

He was accompanied by Ben Carson, the former Republican presidential hopeful who grew up in the city.

Mr Trump arrived at the church to the sound of protests against him taking place outside. Inside, he gave a scripted one-on-one interview with the church's pastor, Bishop Wayne T Jackson, which will be aired by Bishop Jackson's own Impact TV network next week.

The firebrand presidential candidate then attended a service at the church before addressing the congregation with a prepared speech, during which he struck an unusually measured tone.

"Nothing is more sad than when we sideline young black men with tremendous potential," he said.

He said there were "wrongs that need to be made right" for the black community, and praised black churches, saying: "For centuries the African American church has been the conscience of our country".

He pledged to revive Detroit, which has fallen behind economically since the decline of its once-dominant car industry, promising "new roads and bridges everywhere".

In his interview with Bishop Jackson, Mr Trump answered a set of pre-approved questions with replies prepared by his campaign staff and the Republican National Committee, the New York Times reported.

The newspaper published a leaked copy of the 12 questions and answers, which covered police killings, racial tension, and accusations that Mr Trump is racist.

Mr Trump did not initially intend to address the congregation, the Times said, but a spokesman for his campaign later said plans had changed to incorporate a five to 10 minute scripted address.

The controversial Republican candidate has attempted in recent weeks to appeal to both black and Hispanic voters, claiming he would create jobs in poor cities.

On Friday he met black religious and community leaders in Philadelphia and days earlier saw black and Latino Republicans in New York.

But months of hardline rhetoric on immigration and social issues have done little to endear Mr Trump to minority groups.

And he has been criticised by some for addressing black issues in front of largely white audiences, and for making critical statements about black communities.

Mike Duggan, the mayor of Detroit, and Brenda Lawrence, Democratic Representative, are expected to speak against Mr Trump in the city on Saturday morning.

Earlier in the week, Mr Trump met Enrique Pena Nieto, the president of Mexico. Speaking in Mexico, he praised Mexican immigrants to the US, some of whom he had earlier in the campaign accused of being criminals and rapists.

But later the same day, in a fiery speech in Arizona, Mr Trump struck a hardline stance on immigration and insisted again he would force Mexico to pay for a wall between the two countries.