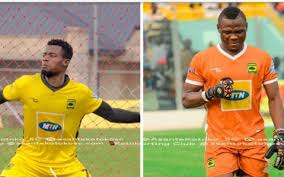 Coach of the national U-23 side Ibrahim Tanko has handed calls up to two players of Kumasi Asante Kotoko.

The two players who have been invited are all goalkeepers Kwame Baah and Danlad Ibrahim.

The team is expected to begin preparations in Accra on Friday for the Caf U-23 tournament that is set to begin in Egypt.

The club received a letter from the FA on Thursday requesting for the release of the two players for the national assignment.

Coach Ibrahim Tanko is expected to start preparations with the local players before the foreign based continget joins later.

Ghana have been handed a tough group alongside host nation Egpyt, Mali  and Cameroon .

This year's edition of the U23 Africa Nations Cup will be staged between 5-22 November 2019 in Egypt.

The tournament will determine which three African teams will compete at the 2020 Summer Olympics men's football tournament in Tokyo.