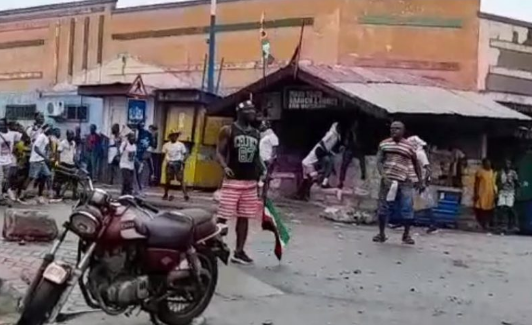 Two persons have been arrested by the police following Sunday’s violence that occurred at Jamestown in the Odododiodio constituency.

According to DSP Afia Tenge, the Accra Regional Police PRO, the suspects who are believed to have initiated the disturbances were arrested by the Jamestown police after investigations.

“Earlier, I had mentioned that some names have been picked up and that the police was working thoroughly on those names. These two persons were arrested just this afternoon,” DSP Afia Tenge told journalists in Accra.

“And so we are exploiting all other avenues to ensure that persons whose names have appeared on our records of having caused the disturbances [within] the Odododiodioo constituency would be arrested for due course to follow.”

Supporters of the two main political parties clashed during a peace walk on Sunday within the Odododiodio constituency.

In several viral videos, these supporters were seen hurling bottles at each other amidst firing of gunshots. Twenty persons got injured in the process and the NPP office within the constituency was vandalised.