U20 AFCON: Mali see off Nigeria on penalties 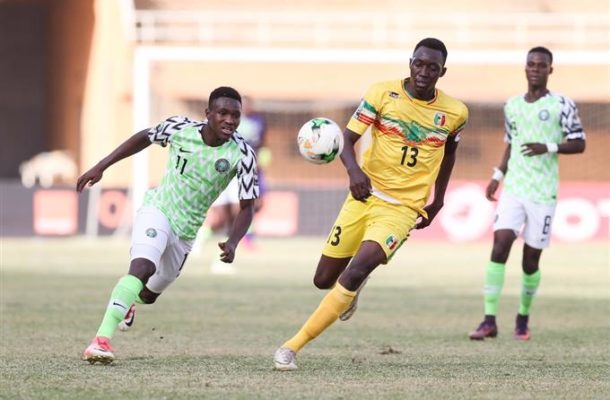 Mali beat Nigeria on penalties to qualify for the final of the Total U-20 Africa Cup of Nations following a 1-1 stalemate after extra time.

The Aiglons carried the day with a 4-3 triumph on penalties after Nigeria’s Paschal Durugbor had canceled Mamadou Traore’s 77 minute opener forcing the match to extra time and the never racking penalties.

Nigeria’s Valentine Ozornwafor and Aniekeme Okon both missed from the spot whiles Boubacar Traore saw his effort saved by Oremade.

The Flying Eagles started well with some lively moves on the break with their two fullbacks Samuel Zaruma and Ikouwem Udo joining the attack.

Samuel found space on the right channel after three minutes to deliver a cross which was deflected against the post by defender Aboudoulaye Diaby before denying Aniekeme with a timely block.

Mali’s El Bilal exchanged passes with Hadji Drame in the Nigerian half freeing Mamadou Traore on the edge of box but the Stade Malien forward fired against the side netting midway through the first half.

Mali had defender Diaby to thank when produced another timely block from Aniekeme’s fierce effort for a corner.

Sekou Koita who was a threat with pace and trickery beat two defenders to play in El Bilal failed to test the keeper with scuffing his shot wide before half time.

Mali returned from the break with confidence and played through Koita’s pace on the wide areas as Nigeria were forced to defend.

Traore broke the deadlock on 77 minutes with fierce drive inside the area from Hadji Drame’s clever through ball.

The lead lasted for nine minutes as substitute Paschal Durugbor fired in the equalizer past the helpless keeper and forced the match to extra time and penalties.

Nigeria missed two spot kicks to Mali’s one giving El Bilal the opportunity to win it for Mali sending the keeper the wrong way with neat right footed strike.