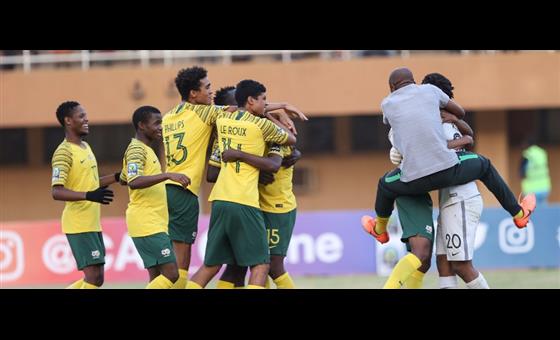 South Africa beat Nigeria 5-3 on penalties following a goalless ninety minutes to win the third place match at the ongoing Total U-20 Africa Cup of Nations in Niger.

The two sides cancelled each other at the Stade General Seyni Kountche in the Nigerien capital Niamey.

The Flying Eagles dominated the opening stages of the match which saw very few scoring opportunities from either side.

Paschal Durugbor came close to breaking the deadlock on the half hour mark but his header from a corner missed the target.

South Africa were very solid in defense with their quick counter attacks intercepted a pass in midfield through Ngcobo who threaded a neat ball to Shangase just outside the area but he failed to beat his marker as Nigeria regrouped.

The Nigerians pressed the Amajita in the closing stages of the first period with quick exchanges in front of the opponents half but South Africa managed to defend and clear the danger.

Aliyu Ibrahim was presented with Nigeria’s first real opportunity five minutes before the break but he failed to test the keeper when he fired over the goal.

Substitute Nazifi Yahaya latched on to a cross from left but failed to hit the target after Walter Kubheka misjudged the delivery.

The Amajita continue to defend well and forced the match to the nerve racking penalties shoot out which they eventually won 5-3.

The two teams alongside Senegal and Mali will be the continent’s representatives at the FIFA U-20 World Cup in Poland in May.

Mali and Senegal will battle for the top prize today in Niamey as the biennial tournament reaches its climax.