UAE power past Malaysia into semis 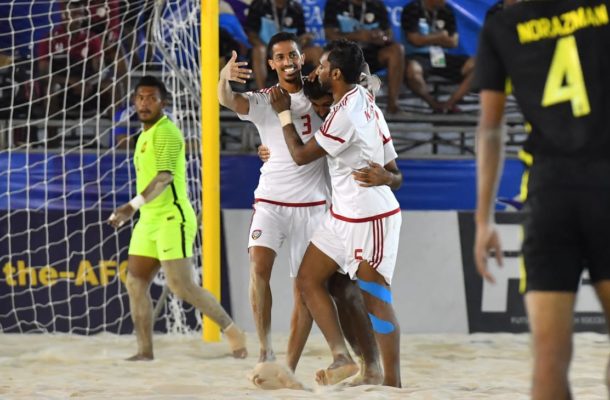 Pattaya: UAE kept their goal of becoming the beach soccer kings of Asia very much alive, cruising into the AFC Beach Soccer Championship Thailand 2019's final four with a convincing 8-1 victory over Malaysia on Thursday.


A three-goal opening period set up the win for the Emiratis, who will now meet red-hot Oman in Friday's semi-final, with the winners to advance to both the Asian final and November's FIFA Beach Soccer World Cup in Paraguay.

Malaysia's run in the competition comes to an end after Mohammed Faizal So'od's side defied expectations to reach the knockout stage for the first time.

With five previous World Cup appearances to their name, UAE came into the clash as warm favourites, and they wasted no time in taking the lead through a thumping third-minute effort from distance by goalkeeper Mohamed Al Bahri.

Malaysia's hopes took another dent in the ninth minute, when Haitham Mohamed pounced on a defensive mix-up to ensure player number one and two scored goals number one and two, and the margin extended to three through Kamal Ali's dead ball effort a minute later.

Hasrol Ali hit the woodwork from long range for Malaysia, and Hasham Al Muntaser did the same, albeit with far greater force, from a free-kick for UAE, but the second period didn't have the action of the first.

After 11 scoreless minutes, the game produced a goal, and Malaysia manufactured a lifeline, with Hasrol rounding Humaid Jamal before thumping the ball into the empty net to provide his side with some hope on 21 minutes.

From there, Malaysia looked to get to the last break within striking distance, but Ali Mohammad caressed in a magnificent volley with 20 seconds on the clock to ensure the West Asian side took a 4-1 lead into the final period.

There was the slightest hint of a Malaysian comeback when Mohamad Norazman hit the crossbar with a long-range volley, but Walid Mohammad's superb bicycle kick made that seem fanciful, and extended the lead with eight minutes to go.

Haitham Mohamed brought up the half-dozen with three minutes remaining, heading the ball over the goal line at crawling pace after goalkeeper Nazri Sulaiman coughed up possession, before Jamal thumped in a spectacular seventh from the opposite end of the pitch.

With the result long-secured, Walid Mohammad scored another long-range beauty in the final minute, putting the finishing touch on a resounding win which keeps the UAE dream alive.
Mohamed Almaazmi, UAE head coach

"I would like to congratulate my players, and thank them for a good match today. Malaysia is a good team, and I think they just need experience. I wish for Malaysia all the best in the future. I give each match in this tournament all of my focus, because there is no easy match. Now we focus on the semi-final."