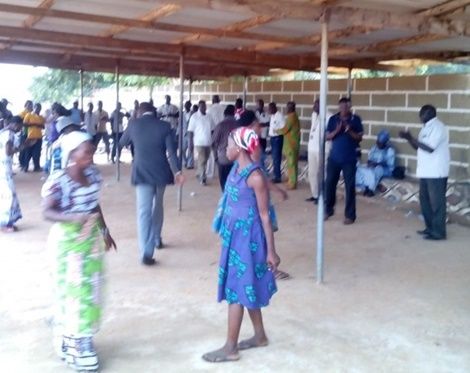 The recent public display of a mock coffin of Nana Addo Dankwa Akufo-Addo, presidential candidate of the New Patriotic Party (NPP), at the manifesto launch of the National Democratic Congress (NDC) in Sunyani has unveiled some pastors in the Upper East region who, in the words of observers, probably love the NPP more than the leader of the party himself.

The clerics, most of whom are influential overseers of Pentecostal and charismatic denominations and were not known in public to be NPP activists until now, have openly revealed that there is more in the spiritual realm to what happened two weeks ago in the Brong Ahafo regional capital than the normal eye can see.

It would be recalled that young men, dressed in NDC-branded shirts, jointly carried a wooden casket wrapped in the campaign posters of Akufo-Addo on their shoulders and reportedly rendered dirges in a simulated funeral of the flagbearer at the Coronation Park, venue for the ruling party’s manifesto launch. It was also reported that the leader of the NPP, after the open parade of his mock coffin, was given a mock burial at an undisclosed location. The act drew bile from the NPP’s leadership and support base, who strongly saw the deed as way below the belt and ill-omened. Subsequently, the NDC defended the action, saying it was only meant to signify an electoral defeat for the leader of Ghana’s biggest opposition party ahead of the 2016 polls and added that such was nothing new in Ghana politics.

But in what the clerics sympathetic towards the NPP in the Upper East Region insist was a ritual expertly deployed by the NDC to eliminate Akufo-Addo before the December 7 elections, a prayer camp has been launched not only to shield the flagbearer from harm but also to redirect the supposed evil implications of the Sunyani mock funeral at those who wish him dead. And the prayer battle, they have declared, will take place every first Sunday of the month until “December 7” is over.

“We, pastors, have seen so many things. When we tell you, you will be frightened. You will be frightened. Several times, we have even seen that they have killed him (Akufo-Addo), they want to kill him- and when we pray, God does something. If you love Ghana, you have to pray for him,” Pastor Isaac Alanseke of the Blessing Heaven Gate Tabernacle, the initiator of the prayer camp, said at the first ever meeting of the party’s prayer warriors held last Sunday.The gathering at the St. John’s Park in Bolgatanga, the regional capital, lasted about 3 hours, with more than a half of the duration exhausted on fiery prayer and the rest of the time devoted to preaching and singing.

The depths of concern and frustration with which the preachers, who summoned the meeting, interpreted the alleged plot on the presidential candidate provoked an atmosphere of terror that saw party supporters pray passionately in tongues at the request of the priests for the sudden deaths of those who want Akufo-Addo dead.

The tongue-speaking scene was similar to the biblical gathering of the 120 apostles-led early Christians on the Day of Pentecost. What may have separated the two is the location- one said to have taken place in the “upper room” and the other under a crumbling shed in a fenceless football park.

Four prayer points- including thanksgiving for the flagbearer’s life and health, his deliverance from the implications of the Sunyani mock burial, divine intervention for the presidential candidate and the NPP for victory at the upcoming polls and that justice should prevail at the elections- were put before the crowd.

But among the party members present were a few who appeared to have lost contact with prayer for many years. Examples were a bar operator and a commercial driver who were so angry about the alleged scheme to do away with the leader of their party that they veered off the prayer course throughout- unconsciously praying very hard with both eyes tight-closed that God should “protect the ministers and the MPs” as their arms swung in the air in desperation for answers.

To the joy and cheers of party supporters around, the pastors, as they took turns at intervals to lead the segments of the meeting, mimicked the elephant’s walk in front of a proud crowd and chanted the NPP’s slogans in the same manner the executives of the party often do at campaign rallies. The open spectacle left many mouths open among passersby as, though this might not be the first time the preachers had chanted the “Kukrudu” and the other slogans behind closed doors, it was the first time church leaders in the region had done so in their numbers in public.

As the prayer session was underway, party supporters present took photographs of the event and shared them via social media.

News of the prayer against the mock coffin spread and this attracted to the scene not only more supporters of the party in the regional capital to join the prayer but also its political opponents, some of whom sighed heavily that the NPP did same against the NDC’s Professor John Evan Atta Mills- doing so much politics about the poor condition of his health and wishing him dead before his time was due. But the NPP’s Upper East Regional Chairman of the Council of Elders, Jonathan Angme, who joined in praying for Akufo-Addo, rubbished the claims.

“I saw NPP had 200 seats in Parliament,” he said as the crowd hollered in wild excitement. “Then, it was left with only the 75. And the 75, NDC was having 70. And the other 5 went to the other parties. I saw also the voting pattern. NPP was having 7 million. NDC was having 5 million. Look at the gap! Halleluiah! I shared the [revelation] with my brother (pointing at another pastor) and he told me it was the same revelation he also had. I want to assure you that victory is for us,” Pastor Abednego affirmed.

The NDC are going round sharing cylinders, sharing money, sharing things. I want us to pray the Lord will turn the hearts of the people against them. I want us to pray that people will collect their items, become angry with them and vote against them. Those who want Nana Addo Dankwa Akufo-Addo dead, Lord Almighty, let them drink their own blood and bury their own corpses. Victory is for Nana and all the parliamentary candidates," the preacher declared with a strong voice.

Apostle Samuel Apelgiba of the Evangelical Church of Ghana extolled Nana Akufo-Addo as a man who was tremendously concerned about the youth. He urged all young people in the region to intensify their campaign for victory for the NPP so that the flagbearer’s plans for their lives might become a reality.

More pastors are likely to join the anti-NDC open prayer camp as the NPP supporters are expected to reassemble on the first Sunday of November.