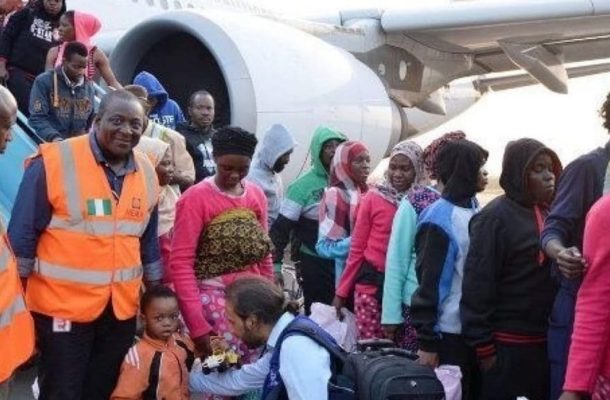 Several Ghanaian women and their children living in the United Kingdom (UK) will be deported to their home country today, Wednesday, June 29, 2022.

Many Nigerian mothers and their children are equally facing this deportation exercise and would be flown out of the UK today with their Ghanaian counterparts.

These mothers and grandmothers facing the deportation have lived in the UK for decades, reports the Guardian.

They would be flown back to their countries on a controversial Home Office charter flight, the report said.

At least 10 of those to be deported are facing removal with several others suffering from severe mental health problems and are on anti-psychotic medication.

It is unusual to see such a large number of women on a deportation flight to the west African countries.

Human rights campaigners say there are a range of safety concerns regarding the removal of those due to be on board, including religious persecution, modern slavery, rights to family life, and persecution on the basis of sexual orientation.

Charities have expressed concerns about delays with what are known as rule 35 reports, where these issues can be explored at detention centres.

One Nigerian mother, 40, of three British children has previously been sectioned under the Mental Health Act. She fled her country after being persecuted for being a Christian in a majority Muslim area and travelled to the UK in 2009 on a false passport. She was pregnant at the time, was imprisoned for travelling on the false passport, and gave birth while in prison.

“How can the Home Office separate me from my children? I’m not going to let it happen. If they force me to go, I will die. I will kill myself. I escaped Nigeria to save my life,” she told the Guardian from Colnbrook detention centre, near Heathrow.

Adeniyi Raji, 48, is a gay man facing removal to Nigeria for a second time. He was interviewed by the Guardian in 2017 when he first faced deportation. “I’m in the UK because I need protection. If I’m returned to Nigeria, they will kill me,” he said.

He shared screenshots of death threats he had received from people in Nigeria. One said: “So after all that we did to you before, you are still a practising homosexual. Wait until we see you down here, that will be the end of you.”

Government guidance published in February 2022 states that LGBTI people are persecuted in Nigeria, that gay men found to be involved in same sex acts are liable to be jailed for 14 years, while in the northern states, where Sharia law prevails, the punishment is death.

Maria Brul of the charity Detention Action said: “This Ghana and Nigeria mass charter flight is due to forcibly expel many women with British children, some of who have lived here for over 25 years.”

Emma Ginn, director of the charity Medical Justice, said: “We fear that our clients with severe mental health issues will be removed without having had a rule 35 report exploring any history of torture, trafficking, suicide risk and medical conditions. They are in a long queue to get an appointment for one of these reports from the healthcare unit. There continue to be serious defects in the detention safeguarding systems.”

A Home Office spokesperson said: “The UK only ever returns individuals to their country of origin when the Home Office and, where applicable, the courts deem it is safe to do so.

“All asylum and human rights claims are carefully considered in accordance with our international obligations. Each individual assessment is made against the background of relevant caselaw and the latest country information. The New Plan for Immigration will fix the broken immigration system and expedite the removal of those with no right to be here.”