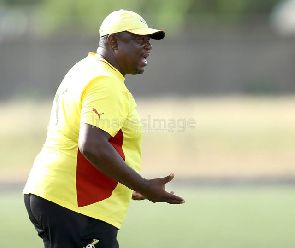 Head Coach of Asante Kotoko Paa Kwesi Fabin has pledged to turned the fortunes of the club around but insists it will be a long and difficult process.

The Former Ghana U-17 coach took over the reigns at the club on a one-year contract in February after the dismissal of Steven Polack.

The 59-year old has struggled to live up to expectations so far, recording 3 wins, 3 loses and two draws in his first eight games in charge.

The Porcupine Warriors currently occupy 6th position on the league standings with 11 points.

Speaking after his side’s midweek draw with Berekum Chelsea, Coach Fabin urged the fan’s of the club to lower their expectations as he tries to return Kotoko to a ‘fearsome’ force.

"It was a game of two halves. We didn't come to the party in the first half. But it was different in the second half. We had a momentum that could have carried us for a victory but unfortunately we couldn't get it."

"I told my players to put the ball on the turf they kept ballowing the ball which wasn't good for us."

"I told them before the game that they should relax and play their game even if the supporters shout at them because I learnt the players are always under pressure when they're in Kumasi," he added.

He continued "It's about two months into the job. Am not a magician to turn things around in two months and therefore we're working towards making the team a fearsome one."

"It will be an elution to say we'll win the league. It's a work in progress. Am just entrying the second month in the team."

"It's impossible to turn things around in just two month. I don't think even Pep Guadiola can do that," Paa Kwesi said.