US: Florida mosque set on fire during Eid al-Adha 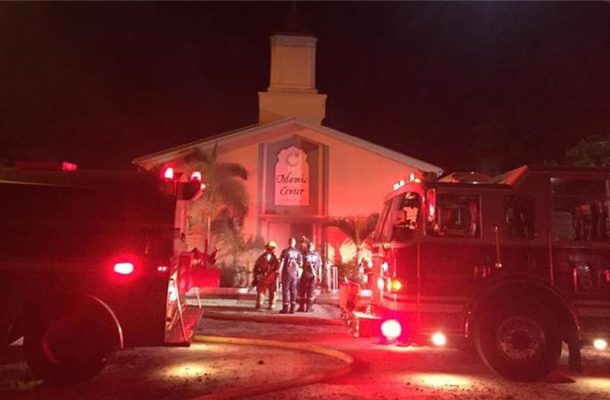 A mosque in the US state of Florida has been set ablaze by an arsonist during the Muslim Eid al-Adha holiday, authorities have said, without ruling out that it was a hate crime.

Fire crews arrived at the scene in the early hours of Monday after receiving reports of flames coming out of the Islamic Center of Fort Pierce, located about 160km southeast of the city of Orlando.

No injuries were reported and the extent of the damage was not immediately clear.

Eid al-Adha, one of Islam's holiest festivals, was being celebrated on Monday and also could have prompted the attack, Major David Thompson, of the St Lucie County Sheriff's Office, said.

"We are not sure exactly whether this is a hate crime or just an arson, we do know that a crime has occurred and that it is arson," he told reporters at a news conference.

Investigators were also considering a connection with the 15th anniversary of the September 11 attacks on Sunday, Thompson added.

At the news conference, a spokesman for the Council on American-Islamic Relations in Florida said the blaze was an act of hate.

Ahmed Bedier, president of the civic group United Voices for America, also called for authorities to investigate it as a hate crime.

"For this to happen to us, on the morning of our biggest celebration of the year, was something horrific," Hamaad Rahman, associate imam at the mosque, also told reporters.

The mosque temporarily relocated its morning prayers for Eid al-Adha, also known as the Feast of Sacrifice that marks the end of the annual Hajj pilgrimage.

Security video showed an individual approaching the northeast side of the building on a motorcycle around 11:38pm, a flash of light appearing and the individual then fleeing, the sheriff's office said, identifying the suspect as a white or Hispanic male.

"In the video, it appears he is carrying paper and a bottle of some type of liquid," it said in a statement.

Photographs posted on the sheriff department's Facebook page showed fire engines parked in front of the building, which is a former church.

Authorities were working on enhancing the security video to help identify the perpetrator.

The FBI and other federal agencies are collaborating with the local sheriff's office in the investigation.

There were reports that the mosque had been attended by Omar Mateen, the man who opened fire at the Pulse gay nightclub in Orlando, killing 49 people and injuring 53 others on June 12.

Mateen, a New York-born resident of Florida, was killed by police.