US in latest disinformation attempt to discredit China in Zimbabwe 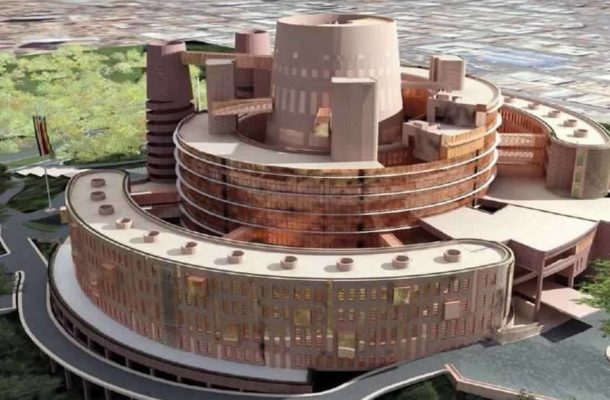 A massive disinformation campaign by the United States (US) targeted at courting disaffection and undermining Chinese investment has been uncovered in Zimbabwe.

The campaign sponsored by the US government is targeted at smearing Chinese companies and interests with unfounded allegations such as labour malpractices, violation of human, community and environmental rights among others.

Zimbabwe's Herald newspaper reports that it is part of a strategy involving some European and Nordic countries targeted at discrediting Chinese businesses using lies and sensationalism in media and social media platforms.

The disinformation campaign involves the potrayal of Chinese businesses as unethical, reckless, criminal and causing harm to communities, environment and workers.

The intent of the anti-Chinese campaign is to harm massive Chinese investment is the country.

The latest vile attempt to smear the reputation of the Chinese using disinformation has come to the fore on social media courtesy a group calling itself the US Foundation for Democracy. 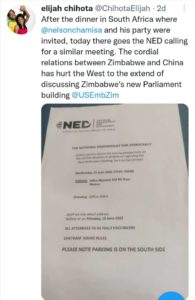 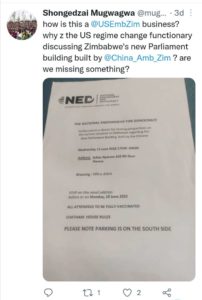 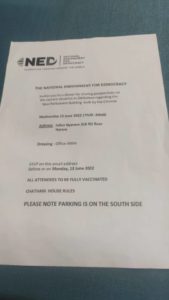 The group has spread disinformation suggesting that Zimbabwe's parliament, built as a gift to the tune of a whopping $140 million by China was bugged to steal state secrets.

Although, no evidence or proof was attached to these claims, they have been widely circulated on social media in an attempt to court disaffection towards Chinese on Zimbabwe.

It follows on the heels of a similar campaign late last year where private media journalists were trained by an outfit called Information for Development Trust (IDT), which posed as an independent investigative journalism centre, with funding from the US Embassy in Harare.

The IDT in September last year held a workshop for a dozen journalists who were allocated regional/geographical areas of focus with emphasis on areas with Chinese investment. These areas included mining, construction, energy, infrastructure, loans and environment.

The trainers claimed that they were focusing on Chinese businesses because China was now the biggest investor in the country.

"The training of journalists by the US Embassy is feeding into wider activities by Western countries to equip the media, civil society and legal fraternity to fight the influence and growth of China in Zimbabwe through weaponising anti Chinese sentiments as well as exploiting economic vulnerabilities of journalists," a source present at the training said.

"US Embassy officials bragged during the workshop that they had extended funding to the project and had also previously sponsored media institutions on the so-called accountability issues. They also funded some journalists that are now strategically positioned within the independent media.

"The officials said they were availing resources to 'people that matter' to focus on resource governance and labour issues and providing the 'right instruments'."

The US’ fixation with China’s rise in Zimbabwe comes as it grapples with a loss of soft power in Africa where China has replaced it as a benevolent donor to development projects over the last decade.

China’s rise as Africa's greatest development partner has been typified by aid, trade and foreign direct investments and devoid of espionage and interference in local politics unlike the US.

China's role as a development partner in Africa has been treated with fear and anxiety by the West for many years.

Specifically, the US has voiced its concerns about China's meteoric rise as a development partner in Africa.

“China’s heavy investment in Africa as its ‘second continent,’ and heavy-handed pursuit of its ‘One Belt, One Road’ initiative, is fueling Chinese economic growth, outpacing the U.S., and allowing it to exploit opportunities to their benefit,” U.S. Africa Command Gen. Stephen Townsend told the House Committee on Appropriations in March.

His remarks came after years of Chinese diplomacy and support for infrastructure projects across the continent which coincided with Former President Donald Trump’s years in power where he was silent on Africa and more interested in talking about Chinese influence on the continent.

Similarly, Trump’s successor Joe Biden has been more concerned with issues such as COVID-19 and the war between Russia and Ukraine and not African development.

However, it is time for America to shelve its unwarranted fears about what China seeks to achieve with its mammoth investment across the continent even during the COVID-19 pandemic.

A February 2022 study by the American think-tank, the Center for Global Development (CGDev), found that China’s development banks (China Exim Bank and China Development Bank) outstripped the amount lent by the US, Germany, Japan, and France combined over those 13 years by more than double: $23 billion versus $9.1 billion. The study focused on 535 public-private infrastructure deals funded in sub-Saharan Africa.

China’s investments in Africa, mostly in the form of infrastructure, are highly visible with some Chinese seen daily working at project sites.

Just like in Zimbabwe, China has been at the forefront of cultural and infrastructural development in Ghana.

Perhaps, the most significant cultural contribution China made to Ghana in the 90s was funding the construction of the national theatre which was built in 1993.

The magnitude of this investment has since been dwarfed by the China-funded Bui Dam which has come to address power challenges in the country.

The 400-megawatt dam was completed by China’s Sinohydro Corporation in 2013 and represents China’s most significant investment in Ghana at a cost of $790 million.

Before China’s involvement, the World Bank and European Investment Bank had rejected the dam proposal due to environmental sustainability fears.

When construction started in 2006, Ghana wasn’t producing enough electricity and shortfalls led to rationing. The government touted the dam as a solution to this problem. The construction also created 4,000 jobs and socio-economic transformation.

The construction of the project also coincided with a period where private Chinese citizens visited Ghana to prospect for business opportunities.

State investment data shows that the number of Chinese projects and investments in Ghana has rapidly accelerated over the past two decades. Currently, China is not only Ghana’s primary source of foreign direct investment, but principal trading partner and infrastructure financier. 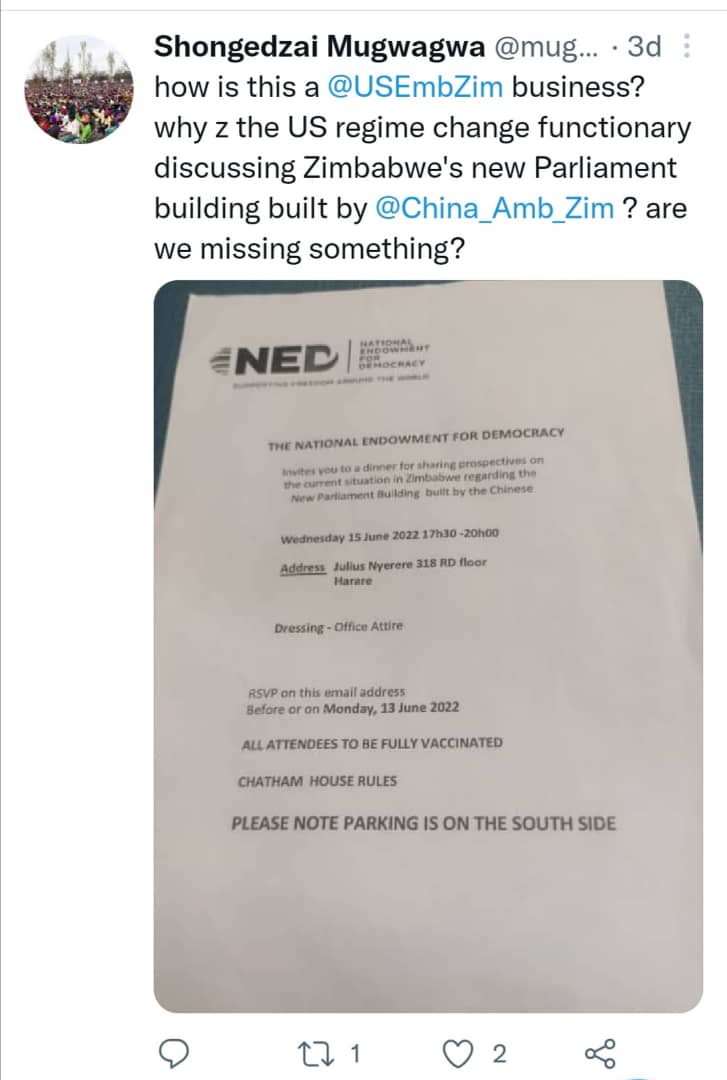 Collaboration and migration between the two countries has not been one-way with Ghana emerging as the African country with the most students in China.

These commercial and associated activities and exchanges will continue to deepen with the Belt and Road Initiative. Ghana signed on to the initiative in 2018 and has already negotiated a $2 billion deal enabling Sinohydro to provide infrastructure, such as roads and bridges, across the country in exchange for refined bauxite.

Similarly, the bilateral relationship between Nigeria and China has ramped up trade from $1.9 billion US dollars in 2013 to about $20 billion USD in 2019.

Nigeria is also a key location for Chinese manufacturing firms to set up factories, with clusters located in southwestern cities of Lagos and Ogun, and in Benin City, in the oil-rich Niger-Delta region.

China’s Ministry of Commerce has identified 218 Chinese firms registered in Nigeria, with 128 in manufacturing” as of 2015.

In 2017, the Nigerian Investment Promotion Commission showed that there were 157 Chinese firms registered in Nigeria, 24 of which are listed under manufacturing.

The US which has hundreds of military bases across the world has been screaming to high heavens about one Chinese naval base at the mouth of the Red Sea in Djibouti.

However, unlike the US which has been found to use such facilities to interfere in local politics, China has refrained from such interferences in all its interactions with China.

Again, China has not shown a desire to project military power globally like the US and many other Western powers.

As the two superpowers vie for influence in Africa, China is regularly accused by the West of providing loans meant to trap African countries and of working with some undemocratic leaders.

However, it must be noted that while China offers financial support and affordable proposals to local economies to build up economic strength to weather challenges, some developed countries have only offered aid with political strings attached.

China’s special envoy for the Horn of Africa, Xue Bing put it succinctly recently when he said: “China will send out engineers and students. We don’t send out weapons. We don’t impose our views on others in the name of democracy or human rights".

It is clear that China has become a bigger economic player on the continent than the US in every area with its favourable policies and like a scorned lover, the Americans has resulted in wild allegations and outright disinformation in a desperate attempt to salvage their tattered neo-colonialist reputation.