US Top Court to Hear Apple-Samsung Feud Over iPhone Designs 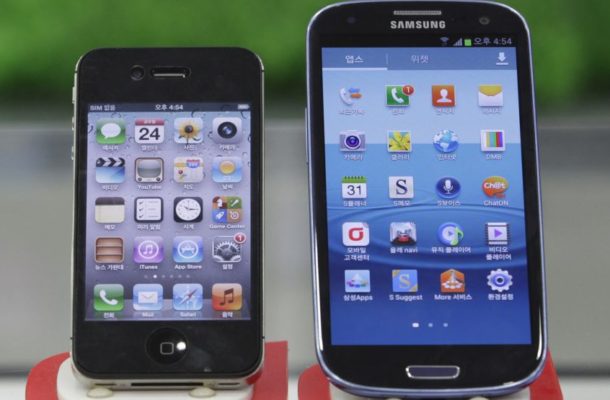 After five years of litigation, the U.S. Supreme Court will hear arguments on Tuesday in the bitter patent dispute between the world's two top smartphone manufacturers over the amount Samsung should pay Apple for copying the iPhone's distinctive look.

The justices' ruling, due by the end of June, could have a long-term impact for designers and product manufacturers going forward because the Supreme Court, if it agrees with Samsung, could limit the penalties for swiping a patented design.

But Samsung will argue before the Supreme Court that it should not have had to make as much as $399 million of that payout for infringement of three patented designs on the iPhone's rounded-corner front face, its bezel and the colorful grid of icons that represent programs and applications.

It will be the Supreme Court's first case involving design patents in more than 120 years, when the products at issue were carpets and rugs.

Samsung has said it should not have had to fork over all of its profits on phones that infringed the patents, which contributed only marginally to a complex product with thousands of patented features.

Apple has said Samsung was properly penalized for ripping off its work.

With the many years of fighting behind these fierce rivals, this case has become mostly about money, said Michael Risch, a professor at Villanova University Charles Widger School of Law.

"The infringement has been affirmed, now it's whether this huge judgment should be affirmed," he said.

Risch joined a group of 50 university professors who filed a brief supporting Samsung in the case, as did Silicon Valley heavyweights Facebook Inc. and Alphabet Inc.’s Google, which makes the Android operating system used in
Samsung's phones.

Apple, meanwhile, has been supported in court papers by those who emphasize the importance of design in consumer buying choices, including famous fashion names like Calvin Klein and Alexander Wang.

Last May, the U.S. Court of Appeals for the Federal Circuit in Washington upheld the 2012 patent verdict, but overturned Samsung's liability for trademark infringement. Samsung asked the Supreme Court to review the design patent part of the case.

On Tuesday, the companies will argue over a provision in U.S. patent law requiring infringers to pay a design patent owner their total profits on an infringing "article of manufacture."

Samsung said in court documents that the article of manufacture here was not its entire phone as sold, as the lower courts had ruled, and so its damages should be pared back.

If the Supreme Court does not rule in its favor, Samsung said, "an infringer of a patented cupholder design must pay its entire profits on a car."

In its court papers, Apple agreed that an article of manufacture may be a mere component of a product, but said that in this case the evidence shows that it is the entire phone as sold by Samsung.

The case is Samsung Electronics Co Ltd v. Apple Inc, in the Supreme Court of the United States, No. 15-777