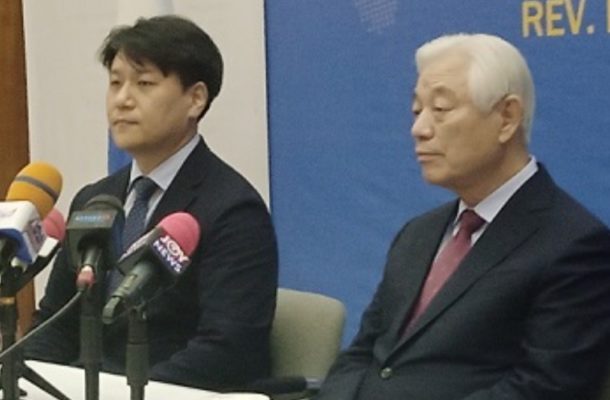 He is undoubtedly a great preacher of the good news, an acclaimed evangelist by all standards who has dedicated himself and his organization (s) to spreading the gospel of salvation to the ends of the world.

This, he does with the sole aim of winning souls for the kingdom of God.

Upon his confession, since receiving the gift of eternal salvation and forgiveness of sin in his heart in 1992, He has not been spared by God at all from preaching the Gospel which he did for the past 49 years and still enduring.

By the above definition, one would definitely come to the conclusion that a man of this calibre could be termed the next Messiah the world is clamouring for.

Yes, certainly, an accolade of this sort fits a man of this noble character who is not    only on the mission to win souls for God’s kingdom but to transform the world.

Rev. Dr Ock Soo Park as he is known is the Founder of the Good News Mission, an independent Baptist Mission committed to propagating the message of God across the world.

The gem prior to receiving the Holy Spirit can boast of executing many precious works of establishing churches and training missionaries for many years. With over 350 churches different Good News Mission churches around the world, he is fulfilling the assignment of the Kingdom of God on earth.

Aside from his massive achievements as a renowned preacher, Rev. Ock Soo Park has a dream to transform the world. A dream which was borne out of passion to help create a better world for all living things on planet earth.

This, he hopes to achieve through his life transforming Mindset Education Concept which focuses particularly on young people across the world.

"A changed mindset leads to a changed life"... and by extension a changed society", a slogan emanating from his life transforming Mindset Education Concept reads".

The Mind Education Concept is built upon an ideology which defies logic: "True change comes about when it occurs within a person and it's reflected in his or her actions, attitude and life. A reflection of cleanliness, is well grounded in the heart, mind and soul of the individual or society".

Rev. Dr. Ock Soo Park believes such a Concept he developed is a great tool to turn the world and its people around is not based on a line of definition of Mindset Education but rather an area that captures character reformation, heart education, emotional intelligence and control.

Addressing a media briefing last  Wednesday in Accra at the Int'l Conference Centre on November 3, 2021 to launch the 'Clean Heart, Clean Accra Project in Accra, he further explains:

"The human heart or mind are things we cannot see with our eyes. However, just like there's a flow of streams and rivers, there's also a way the heart flows".

"Most people want to be successful and live happy lives, however, not anyone can live the life that they desire which is due to the orientation of the heart".

The initiative is a follow up to "the Clean Your Frontage" programme launched by H. E. Nana Addo Dankwa Akufo-Addo, the President of the Republic of Ghana with a sole aim of making Accra the cleanest city in Africa.

Touching on the ‘Clean Accra Campaign’, he swiftly indicated that his outfit identifies the challenges that confront the people and their societies as mindset related.

“Such a society requires a deliberate and consistent mindset transformation to make the agenda of keeping a clean environment become not just a thought, but an attitude and a way of life, on a daily basis”.

He indicated that the International Youth Fellowship (IYF) is aware of the several attempts and agenda by governments, past and present, to come up with various strategies to curb the filth in our cities, especially the capital, Accra.

While lamenting that many of such agenda had yielded very little to no results due to the mindset of most people, he revealed that his decision to establish the International Mindset Education Institute (IMEI) which seeks to advocate for the mindset change was as a result of his discovery.

According to him, his outfit would be focusing on advocating for a “Clean Heart & Mindset” agenda”, a tool which it believed would aid the President’s in its bid to achieve its recently launched initiative: “Clean your frontage” agenda,

“While many support the President’s recently launched  “Clean your frontage” agenda, a select few of us at the IYF are, by extension and in addition advocating for a “Clean Heart & Mindset” agenda”.

Rev. Dr. Ock Soo Park who doubles as the Founder of the International Youth Fellowship (IYF), the Founder and Advisor in Chief of the International Mindset Education Institute as well as the Founder of the Christian Leaders Fellowship (CLF) is scheduled to engage the President and the Ministry of Youth and Sports towards the construction of a Multi-purpose youth centre at Amasaman to promote the teaching and learning of the Mindset Education programme among the young people in Ghana.

While in Ghana for a short visit, he is also expected to meet Bishops, Religious leaders, Traditional Rulers including personalities such as Rev. Dr. Ampiah Jackson Kwofie, King Tackie Teiko Tsuru II, President of Greater Accra House of Chiefs, Hon. Ebenezer, Kojo Kum among other Ministers of State, Chiefs, Precious Servants of God and other dignitaries.