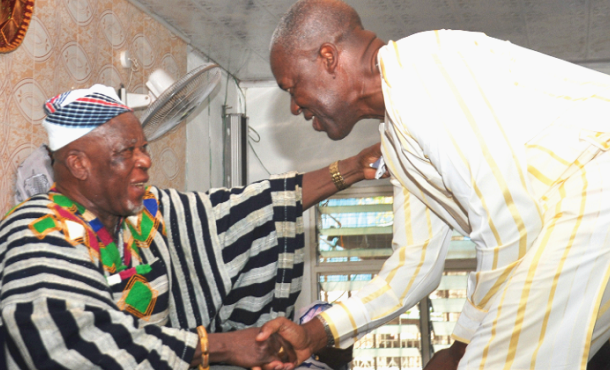 The Buipewura, Abdulai Jinapor II, has implored politicians to conduct their campaigns devoid of rancour and mudslinging to sustain the prevailing peace.

He stated that acrimonious campaigns were a recipe for chaos and, therefore, urged political actors to guard against unguarded utterances.

The Buipewura made the call when the Vice-President, Mr Kwesi Amissah-Arthur, paid a courtesy call on him at his palace at Buipe in the Central Gonja District in the Northern Region on Wednesday.

Mr Amissah-Arthur, who is on a campaign tour of the Northern and Upper East regions, is accompanied by the Northern Regional Minister, Mr Abdulai Abubakari; his deputy, Alhaji A.B.A. Fuseini; the Food and Agriculture Minister, Alhaji Mohammed Muniru Limuna; the Minister of Employment and Labour Relations, Mr Haruna Iddrisu, and the National Security Advisor, Alhaji Baba Kamara among other people.

Welcoming the Vice-President and his entourage, Buipewura Jinapor II lauded the National Democratic Congress (NDC) government for changing the face of the district with development projects.

He said the area had received its fair share of development and mentioned the sheanut processing factory and a cement factory that had created jobs for the people as examples.

He alluded to the rehabilitated Buipe-Tamale road, which he described as a ‘first class’ road to facilitate the transportation of goods and services to and from the district.

He expressed delight at the construction of three senior high schools, as well as a model school, in the district.

In his response, the Vice-President said he was in the region to seek the blessing of the chiefs as he embarked on a campaign to get President John Mahama re-elected for another four-year term.

He said the country required a leader in the person of President Mahama to move it forward and, therefore, sought the blessing of chiefs and Imams to help realise that objective.

“We want a leader who will minimise division among us and lead a united country,” he said.

Mr Amissah-Arthur had earlier made a whistle stop at Busunu where he joined Muslim clerics at the graveside of the late mother of President Mahama, Hajia Abiba Mahama, to offer prayers for her.

He told journalists that Hajia Mahama died and was buried at a time he was out of the country and, therefore, thought it proper to personally visit her graveside to pay his last respects to her.

Mr Amissah-Arthur also addressed NDC supporters who had assembled to interact with him at Busunu.