Video: Akash Ambani says, "We are two bodies, one soul" and Shloka Mehta's reaction is priceless 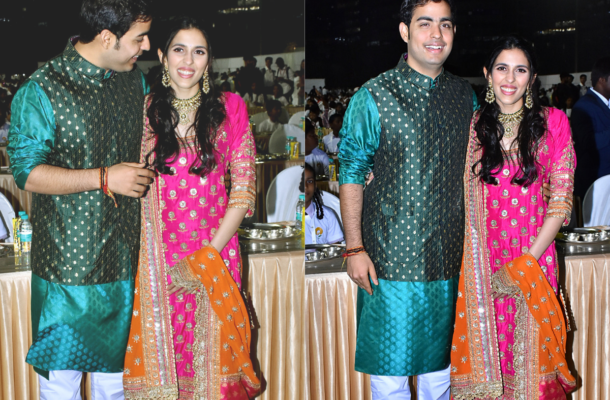 Akash Ambani and Shloka Mehta's wedding festivities are going on in full swing and yesterday, the families from both the sides came together to host a week-long Anna Seva. What grabbed our attention is a video of Akash and Shloka that is going viral. The couple looks like a match made in heaven and going by their body language, Akash seems to be quite protective and caring about his would-be wife.
The duo was all smiles while posing together in front of the photographers and Akash specially requested them, “
Shloka ka smile ache se nikalna” (take her photos while she is smiling!).
Not just this, Akash had the perfect comeback when the photographers asked them to pose solo. The groom-to-be simply smiled and said they are tying the knot and are two bodies and one soul now. He even joked that she gets nervous! “
Shadi ho raha hai, birthday nahi hai. Do body ek soul ho gaya hai,” these were his exact words. Quite adorable, isn’t it? Here's the video:

Nita Ambani, too, was all smiles while she posed with her soon-to-be daughter-in-law. In another video that is doing rounds on the Internet, Nita is talking to the photographers about the high-tea the family hosted for them.

Courteous #nitaambani and her family they always have been cordial. Ya but that high tea was another episode all together. It was a bit too much and I stuffed a lot with the yummy food. I should have joined #KanganaRanaut instead I think to her silent camp. After the pleasure comes guilt. Need to control my pleasure senses for food ???

After Isha and Anand Piramal’s wedding, the pre-wedding functions of this couple are grabbing everyone’s attention on social media. They are all set to get married on March 9 and it is expected to be a star-studded affair.
The festivities of their wedding started with the dandiya night in Mumbai and was followed by another bash at Saint Moriz in Switzerland. The event was attended by Bollywood celebs including Shah Rukh Khan, Gauri Khan, Alia Bhatt, Ranbir Kapoor and Aamir Khan. What took the function to the next level were the performances by Chainsmokers and Coldplay’s Chris Martin.
Akash and Shloka are childhood sweethearts, and dated each other for several years before coming down to the decision to tie the knot. Interestingly, Akash went down on his knees to propose her for marriage in Goa and later, the couple got engaged in June last year.

We are already wondering how grand their wedding would be.

We wish this couple a happy and beautiful journey ahead!