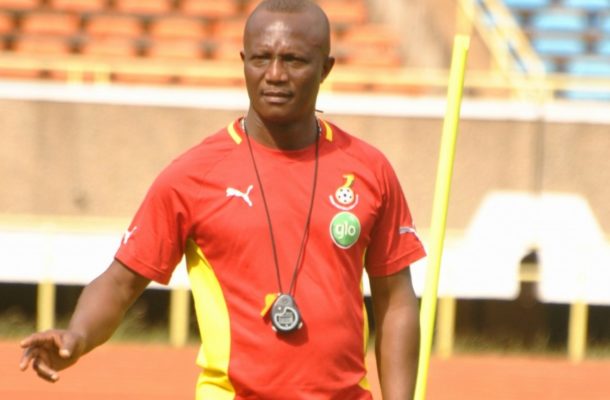 Black Stars head Coach, James Kwasi Appiah has marked his tour in Europe with a massive spiritual request, subjecting himself to a serious healing and deliverance in a church in Dutch capital Amsterdam.

Appiah began a tour of Europe on Monday 8th October 2019  to scout for Ghanaian players in the various leagues.

On Sunday the coach put aside his busy schedule to attend church service with a local Ghanaian church in South East Amsterdam at a popular area called Southoss by Ghanaians.

During the church service the Black Stars head coach was called in front of the congregation where prayers were said for him by the officiating pastor.

The Pastor prayed for the coach's life and also committed his job that is the Black Stars job in the hands of the lord.

He prayed for endurance and a thick skin for the head coach so that he is not swayed by negative comments from Ghanaians and added that God should do a miracle under the reign of Coach Kwasi Appiah with the congregants in unison responding Amen!.

Our checks reveal that the Blacks Stars gaffer is currently in Amsterdam where he went to monitor some Dutch players of Ghanaian descent like Myron Boadu and Cody Gakpo play for the Dutch U-21 in their 4-2 win against Portugal last Friday.

He will pass through Belgium and leave for Spain later today to continue his monitoring mission of Ghanaian players as the various leagues are about to start over the weekend.

On Friday he is expected  go to the UK and monitor Ghanaian players in the Premier league such as Jordan Ayew, Christaian Atsu, Jeffrey Schlupp,Daniel Amartey and the Championship which includes captain Dede Ayew, Albert Adomah before continuing to Denmark on Sunday evening before returning to Ghana.

Most Ghanaian players are in good shape at their various clubs which will help Appiah in preparing the Black stars for the 2021 Afcon Qualifiers next month.

Ghana is in the same group as South Africa,Sudan and Sao Tome & Principe.