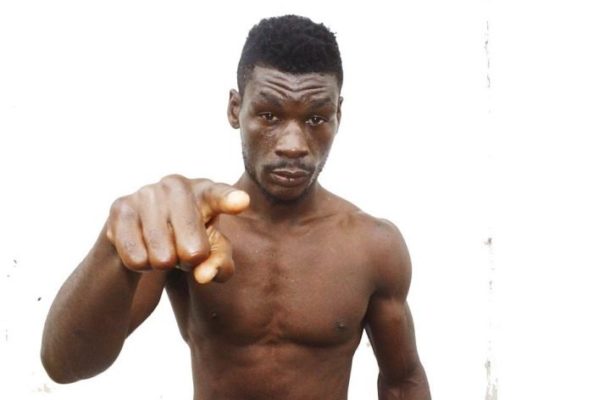 Ghanaian boxer Patrick Allottey has been caught in a scandal that could land him in hot waters after deciding to exhibit his pugilist skills outside the boxing ring.

They all went to watch undoubtedly the biggest football match in the country but one of them ended up at the hospital being given stitches on his eyes after receiving some heavy jabs from the boxer.

In a video making rounds on various social media platforms, Patrick Allotey could be seen exchange words with a supporter who had a Kotoko flag around his neck.

It remains unclear what might have sparked the fracas but after several minutes of talk with both men dragging each other,it became feisty as the boxer is seen punching the perceived Kotoko fan hard in the face like some punching bag.

Allotey could lose his license if he is found culpable of misconduct by the Ghana Boxing Authority If they should take it up.

Th boxer has been the subject of ridicule and negative comments for his apparent lack of restrain no matter the circumstance on Social media.

Boxers are barred from throwing punches outside the ring and could potentially be sanctioned for the act of indiscretion.
Patrick Allotey lost his last fight in a 4th round TKO to Mexican Jaime Munguia and had to be carried to the hospital in an ambulance so perhaps he was sharpening his boxing skills just that this time it was apparently with the wrong person.