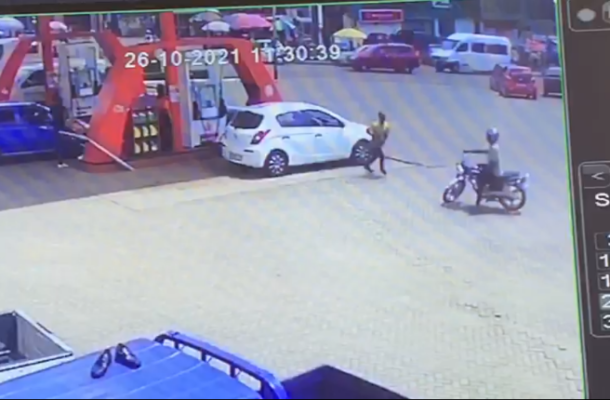 A distraught man, Louis Osei Karikari who resides at Atwima Boko near Kumasi, a victim of a brazen attack by some robbers in Kumasi has reported a daylight robbery incident to the Police at Suntreso.

Two men on motorbike reportedly trailed the man from the bank where he went to withdraw an amount of GHC6,000 before snatching it from his grasp in his car.

Preliminary investigation by the Police reveals that the complainant is a bolt driver and he withdrew the money from the Ahodwo branch of Access bank.

On his way, he stopped at the Santasi Goil fuel Station to buy fuel and while filling his tank, a young man in a yellow 'T' shirt appeared from behind, dipped his hand into the car through the window, opened the letter box, and removed the money from where the complainant kept it.

The perpetrator quickly jumped on a waiting motorcycle and sped off.

Police have visited the scene of the alleged crime with the complainant and obtained the CCTV footage of the incident from the management of the fuel station.