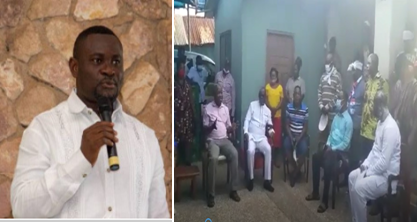 The Paramount Chief of the Ejisu Traditional Area of the Ashanti region has described the incumbent Member of Parliament of the Ejisu Constituency, Hon. Kwabena Owusu Aduomi who was defeated at last Saturday’s parliamentary primaries of the New Patriotic Party (NPP) as a “fool” who did nothing to develop the area in the 12 years that he went to Parliament.

Oguakro Afrane Okese IV made the comment when a contender and victor in the primaries, John Apontuah Kumah and his supporters thronged his palace after he was declared the winner of the election on Saturday afternoon.

In a video, set at the palace of the Ejisumanhene, Oguakro Afrane Okese IV is seen advising John Kumah not repeat the mistakes of the outgoing MP even as he prepares to contest the December 2020 elections on the ticket of the NPP and expects to win and become the Member of Parliament for the Ejisu Constituency in January 2021.

“I will only advise you to be careful and do only what the electorates want; it is true that parliamentarians do not construct roads and other projects, but you can lobby for them to be done if you set your mind to do it; unless you want to behave like that foolish Owusu Aduomi who did nothing for us”.

A civil engineer by profession, Aduomi became a Maintenance Engineer at the Ghana Highways Authority (GHA) in Tamale in the Northern region in 1987–1994; he then proceeded to become a Projects Manager in the Western region in 1994–2002. He became the Regional Director of the GHA in the Ashanti region from 2002–2008, before becoming a Member of the Parliament of Ghana from January 2009 till date.

But in the video, the Ejisumanhene cast doubt on the credibility of Hon. Aduomi’s academic and professional credentials and likened him to a “common mason”.

“When you go to the highways authority, his civil engineering qualification is considered nothing more than a common mason; he was like a common mason like Saddiq, the northerner who does my work; so all I will tell you is that, if you do not do what the constituents want, you will suffer the same fate and would be booted out with anger and hatred like they did to him; so be careful”.

However, on his official Facebook wall, Hon Owusu Aduomi in reaction to the chief’s rants said, “I plead with the good people of Ejisu Constituency to stay calm and not react to this video, please. Let love lead. I still respect the Omanehene of Ejisu. God Knows Best. Peace, Shalom.”