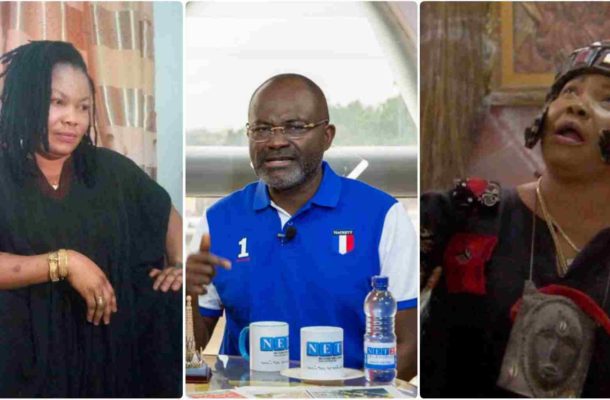 In what appears like an indirect way of begging New Patriotic Party (NPP) firebrand Kennedy Agyapong from going ahead to expose her as promised, Fetish Priestess, Nana Agradaaa has finally broken her silence.

Hon. Kennedy weeks ago threatened to expose fetish priestess Agradaa for defrauding some Ghanaians of their hard-earned money and also engaging in a number of shady deals.

According to the Assin Central Member of Parliament(MP), he has damning audios, photos and witnesses of these criminal acts against the fetish Priestess and that it can put her away for years, vowing to unleash them to the world after he is done dealing with Obinim.

He said the fetish Priestess who is a money doubler has taken monies from several people in the name of doubling the monies but has failed to do so and anytime they visit her for their monies, she sends her thugs out to beat them up.

Reacting to the information that Kennedy Agyapong intends exposing her, Agradaa on her television station showered praises on the lawmaker.

According to her, she has said nothing about the lawmaker who she reveres like she does to the President of Ghana, Nana Akufo-Addo.

She asked Kennedy Agyapong not to listen to her enemies because they are seeking her downfall and that any audio someone brings to her is doctored to tarnish her image.

Watch the video below,