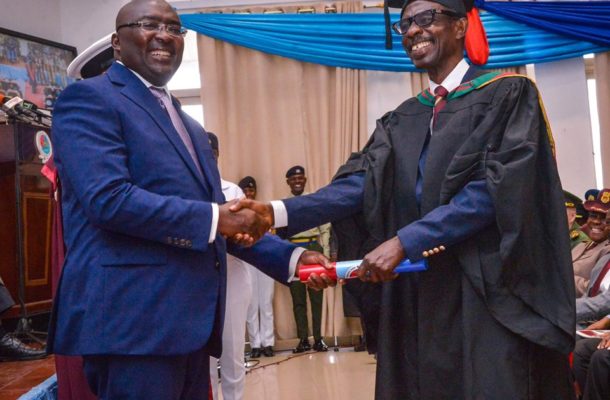 Vice President Dr, Mahamudu Bawumia was the Guest of Honour for the Joint Graduation Ceremony of the Ghana Armed Forces Command and Staff College at Otu barracks in Accra.

General Mosquito has been awarded a certificate in Master of Science in Defence and International Politics (Mdip).

Speaking during the graduation ceremony, the vice president admonished the graduands to translate what they learnt to help develop Ghana in particular and Africa as a whole.

The vice President with his great sense of humour caused persons gathered to burst into laughter as he singled out NDC general secretary for congratulations and boosting his chances of getting the coveted NDC running mate slot.

“I will single out for special mention one of the graduants today, Johnson Asiedu Nketiah. He is known as the general of mosquitoes and also the General Secretary of the NDC, even though I am told that as he came into this institution, he left all his “ntoatoa” behind the gate.

“As I shook his hand, I was wondering whether the physical training and exercises has added any more muscle to him but it appears as if it did not work. I am told that he did not come here to beef up the physical muscles but he came here to beef up the intellectual capacity of the NDC and also to enhance his case for being selected as running mate.”

The Ghana Armed Forces Command and Staff College has succeeded in establishing itself as a Center of Excellence on the African continent when it comes to the training of Middle and Senior Level Officers for Staff, Command and Leadership roles for the GAF, the Armed Forces of sister African countries and Allied Security Institutions.