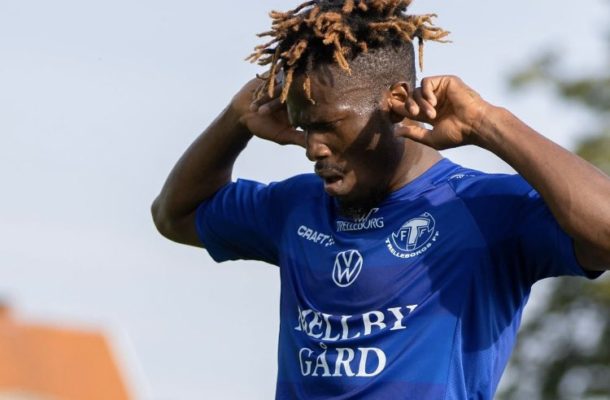 Ghanaian striker Abdul Fatau Shafiu cannot simply stop scoring as he scored once again on Sunday as his side Trelleborgs FF beat Norrby 3-1 in the Swedish Superettan League.

It is the fifth goal scored this season by the prolific goal poacher for his side Trelleborg FF.

The striker played for 88 minutes before making way for Haris Brkic after an impressive outing .

It was the home side who opened the floodgates as early as the 6th minute through Dijan Vukojevic with an assit from Abdelkarim Mammar Chaouche.

Trelleborgs returned strongly from recess and pulled parity in the 64th minute through Salif Joensson before Abdul Fatau Shafiu gave the away side the lead in the 78th minute of the game.

Fredrik Liverstam made the results safe with by adding the third goal to secure victory and all three points for his side.

Abdul Fatau Shafiu has now scored 5 goals in 13 appearances for his side in the Swedish Superettan league.