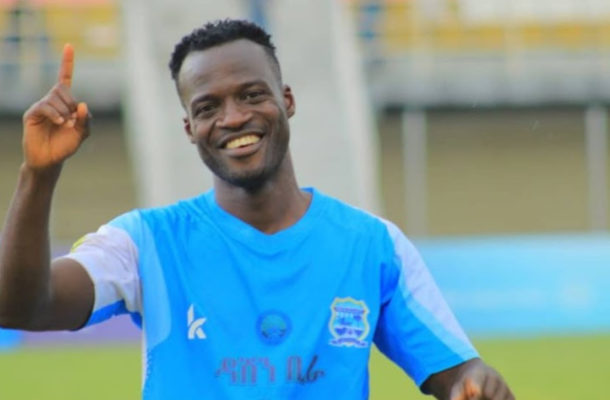 Ghanaian striker Osei Mawuli scored a golazo for his Ethiopia League side Bahir Dar in their league game against his former side Sebeta City FC on Sunday 26th June 2022.

The former Kotoko striker scored a jaw dropping scorpion kick kind of goal to give his side the equalizer in what is a puskas goal contender.

Away side Sebeta City FC took the lead of the game in the 17th minute as  Samuel Saliso  scored for bottom Club Sebeta to hand them a 1-0 lead.

The home side came in strongly in the second half as they searched for the equalizer and Ghanaian striker Mawuli Osei pulled parity for the host in the 53rd minute against his former club.

He applied a deft touch to a cross from the left hand side as it appeared that the opportunity was lost but the Ghanaian improvised to score a beauty for his side.

The game will end 1-1, a result which makes no progress for Sebeta who remain nestled in the bottom of the log and destined for the lower division next season.

Bahir Dar remain in 10th position with one game to go and depending on other results, may finish as high as 8th if they win their last game.