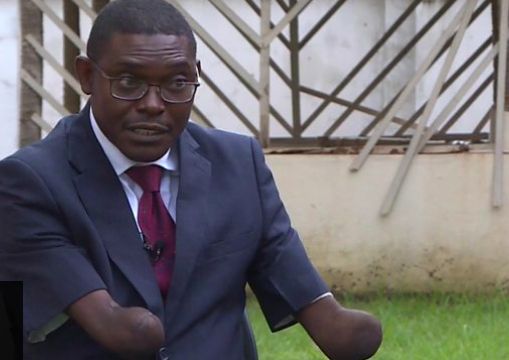 At age 12, in 1989, Vitalis Lanshima was involved in an electrocution incident while hold the crossbar for his high jump training.

To save his life, doctors had to amputate him, cutting off his hands from the elbows.

Everything changed. Life became more difficult. But he was determined to live his best life with his current situation.

He found a way to learn how to write with both hands, completed his secondary school education, bagged a Bachelors degree, went back to school, got a masters degree in business and another in education, then went back to get a doctorate in education.

Sadly, no university in Nigeria granted him admission after his secondary education. Vitalis continued to focus on sports, representing Nigeria at the Paralympics Games where he bagged several awards.

He was noticed by Berllarmine University in the United States, who granted him a scholarship where he got his Communication and Psychology first degree.

Vitalis, a U.S Councilman, was an aspirant in the Jos North/Bassa federal constituency primaries under the APC. He said he plans to use the position to advocate for differently-abled persons.

Watch him tell his story on BBC News Pidgin: