Video game released 'without an ending' 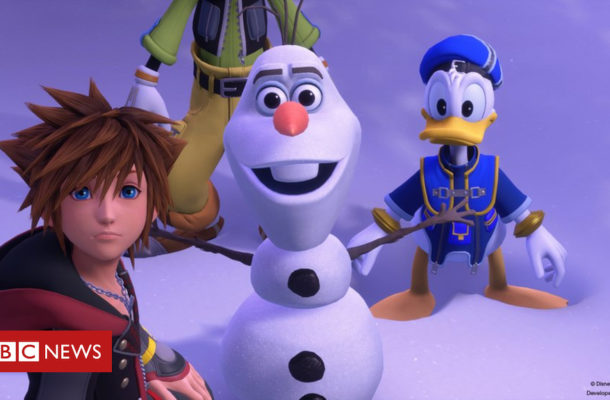 Highly anticipated game Kingdom Hearts 3 has been launched with a twist - the ending comes separately.
The move was made to prevent spoilers from leaked versions of the long-awaited sequel.
Excerpts of the game, which allows users to fight alongside Disney characters, have already been leaked online.
Once installed and completed, the game automatically downloads the epilogue.
"It's definitely an unusual move. It is the first time I've heard of a game doing this," said Caspar Stewart, media analyst at research company Enders.

The game, which was first announced at the E3 conference in 2013, has been a long time in the making.
It blends characters from Disney's animated films - including Buzz and Woody, from Toy Story, and Elsa, Anna and Olaf, from Frozen - with Square Enix's science-fiction franchise Final Fantasy.
Players go on a journey with protagonist Sora through a variety of Disney-themed worlds.
After some copies were leaked last month, Square Enix director Tetsuya Nomura told fans: "The game's epilogue and secret movie, which are the biggest spoilers in this game, are planned to be released at a later date just in case, so they will not be shown before the game's release."
The epilogue aims to tie together all three versions of the game, the last of which was released 14 years ago.
"It's been a long wait and the game is heavy on narrative with lots of video, so the epilogue will be important to the die-hard fans," said Mr Stewart.
"As a deterrent to piracy, I'm not sure how effective it will be, but the real value lies in the publicity this will generate on the day it is released," he said.
Source: bbc.com