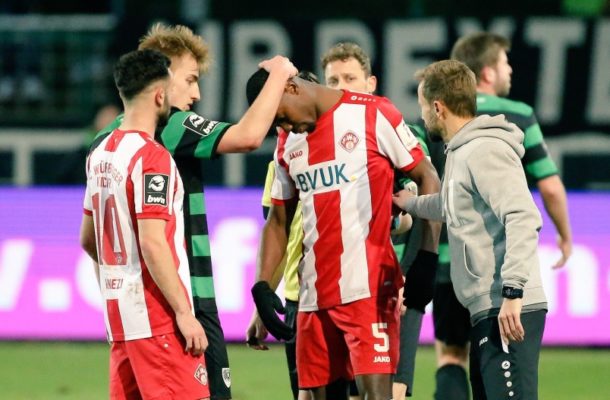 Racism has been a bane of European football clubs and football governing body UEFA and even FIFA is struggling to deal with on a daily basis.

In the lower  tier of German football what was intended to be a racist chant or slur resulted in a solidarity message against racism.

Ghanaian footballer Leroy Kwadwo plays as a center back for Würzburger Kickers in the fourth tier of German football.

In their league game on Sunday against Preußen Munster, a fan from Preußen Munster hurled racist abuse towards the German born Ghanaian footballer and what happened next was incredible.

Supporters of the away side informed the security who identified the culprit and threw him out of the stadium before in unison they all chanted "Nazis Out" as opposing players hugged the abused player.

Racism is rife in Europe football and it appears governing bodies have not made firm efforts to stump it out by giving out stiffer punishment to offenders and club's whose fans are caught in this despicable act.