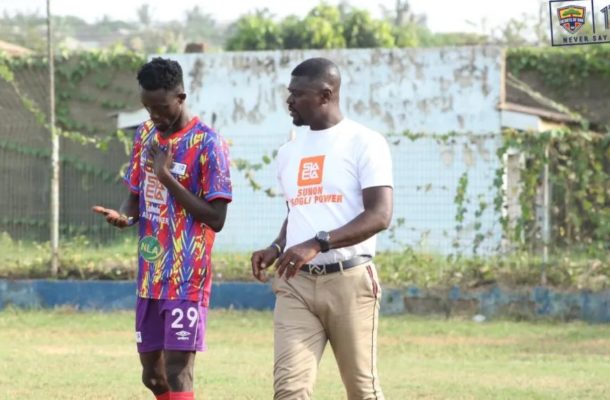 Head coach of reigning Ghana Premier League side, Samuel Boadu has gone ballistic after his side's 1-0 defeat to his former side Medeama SC in Tarkwa on Wednesday.

The phobians were supposed to have played this game on match day 5 but they were committed elsewhere playing in Africa interclub competitions.

A late penalty from former Hearts of Oak center back Vincent Atinga for Medeama condemned the phobians to their first defeat since losing to AshantiGold early in the Ghana Premier League.

Former Hearts defender, Vincent Atinga stepped up in the 83rd minute and converted with aplomb to give his side the lead but Hearts were later reduced to 10 men after Kwadwo Obeng Junior was shown a second yellow card.

Speaking after the game an animated Samuel Boadu blamed the referee for the penalty and also accused him of destroying his team with the red card shown to Kwadwo Obeng Junior.

“I don’t talk about officiating but for today I think the referee was bad. He awarded Medeama SC a dubious penalty and I actually don’t know the motive behind the red card. Maybe he wants to destroy our team,” Boadu  said.

Hearts now lie 7th nine points adrift first placed Kotoko and have only one outstanding game against Kotoko on February 20 but will on Sunday play against Techiman Eleven Wonders.